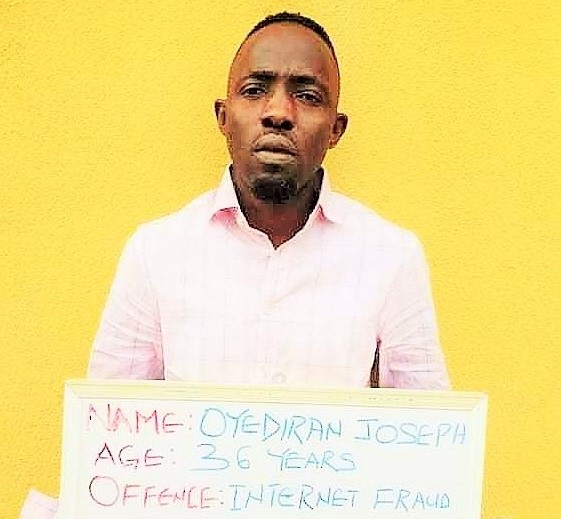 (News Investigators)/ The Economic and Financial Crimes Commission (EFCC) has arrested, Joseph Oyediran, one of the suspected internet fraudsters wanted by the United State’s Federal Bureau of Investigation, FBI.

Zonal Head of the EFCC in Ilorin, Isyaku Sharu, who confirmed the arrest at a press conference on Friday, said the move was “as part of an international crackdown on a syndicate of cyber criminals.”.

According to EFCC, “Three weeks ago, the U.S. authority had written to us for assistance in tracking and possible arrest and prosecution of two most wanted FBI suspects in Nigeria.”

“Investigation conducted by the EFCC revealed that Joseph had benefited about N60 million from the loot via western union transfers,” a statement by the EFCC’s spokesperson, Wilson Uwujaren quoted Mr. Sharu as saying.

The Zonal head disclosed that in the last seven months, the EFCC in Ilorin has revved up efforts to rid the country of cybercrime resulting in the arrest of more than 50 persons involved in internet fraud.

“We have also secured the conviction of 25 of them, recovered exotic cars from them, which were proceeds of their illegal activities,” he said, adding that money recovered from them running into millions of naira were forfeited to the Federal Government.

He also revealed that some property linked to some of the cybercrime suspects, were traced to choice areas in Ado Ekiti, Ekiti State.

“They include supermarket, plaza, and so on, and the conservative value of the property cannot be less than N800 million to N1 billion,” he said.

Recall that the FBI last week charged 77 Nigerians under a 252-count federal grand jury indictment, accusing them of participating in a massive conspiracy to steal millions of dollars through a variety of fraud schemes and launder the funds through a Los Angeles-based money laundering network.

Consequently, the US law enforcement authorities arrested 14 defendants across the United States, with 11 of those arrests taking place in the Los Angeles region.

The remaining defendants are believed to be abroad, with most them located in Nigeria.

The indictment alleges that the defendants and others used various online fraud schemes – including business email compromise frauds, romance scams, and schemes targeting the elderly – to defraud victims out of millions of dollars.