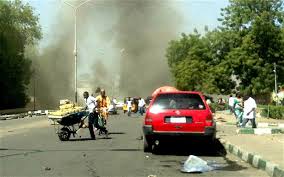 A deadly blast suspected to be bomb has killed dozens in Gombe on Friday leaving several others wounded.

The blast which occurred at a bus station in the capital of Gombe state affected the park of the state’s transit bus services – Gombe Line Transport Services Limited.

Officials of the National Emergency Agency (NEMA) who would not be specific on the casualty figure said the injured have been taken to the state’s General Hospital.

Security operatives and emergency officials arrived the scene to carry out rescue operation, while securitymen have since condoned off the area.

It is not yet clear which group was responsible for the blast. The Boko Haram Islamist insurgents have carried out several attacks in Gombe in recent time.

Agency reports also indicated that the Police had discovered a luxury bus branded “Young Lines”, suspected to be used by the bombers.

The Police also confirmed that three suspects have been arrested while the compilation of the dead and injured was still ongoing.