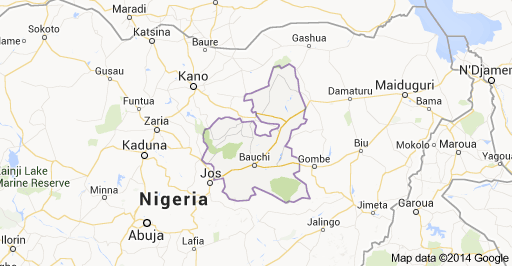 No fewer than 10 persons have been killed in a bomb blast that occurred at a football viewing centre in Bayangari, Bauchi State, northeastern Nigeria.

Twenty eight people were wounded at the explosion, which occurred at Friday night at the People’s Hotel brothel, Bayangari, Bauchi.

Police spokesman in the state, Mr. Haruna Mohammed, said the blast  occurred overnight, adding however, that the source was still unknown.

Mohammed said, no arrest has been made but that an investigation has commenced to ascertain the cause. He added that the entire building has been cordoned off and the scene secured.

According to the Police, the corpses had been deposited at the Abubakar Tafawa Balewa University Teaching Hospital, Bauchi, same hospital where the 14 injured victims are receiving treatment.

“We were just sitting down, watching highlights of the ongoing FIFA world cup at the viewing centre located in between the two story building of the hotel when five men dressed in military uniform strolled in,” Maidoki said.

“We thought they were security personnel who came to relax as well. I noticed they all positioned themselves at the four corners of the hall.

“The next thing I heard was an explosion, after which the arena was covered with thick smoke. Shivering, my friends and I sprawled on the ground.

“We were trying to get out when the five men started shooting sporadically at any one who tried to stand up, and in the process, killing many of the survivors of the blast.”

Another eye-witness, Usman Hassan, said he was just about to enter the hotel when the blast occurred and immediately ran away from the scene.

“As soon as I was a bit far from the scene, I heard gunshots. Few minutes later, a white Toyota Hillux vehicle zoomed out of the hotel on high speed with men wearing army uniforms.”

Meanwhile, the Bauchi State Police Commissioner, Malam Lawal Shehu, has said that one suspect has been arrested in connection with the attack.

Briefing newsmen on Saturday, Lawal said that the suspect was being interrogated and efforts to apprehend his accomplices were ongoing.

He also said the number of victims of the attack had risen from 10 dead and 14 injured, to 11 dead and 28 injured.

He urged members of the public to be security-conscious and to observe happenings within their immediate environment.