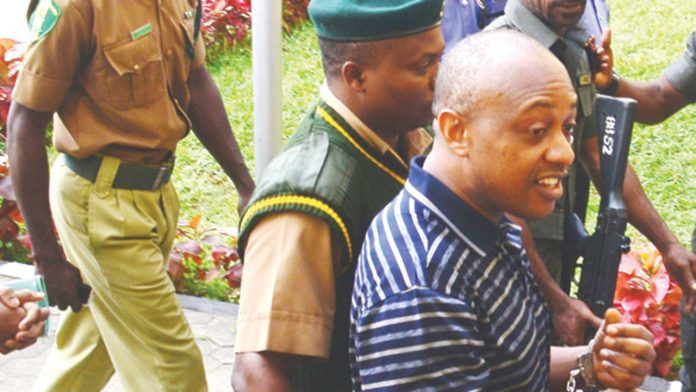 News Investigators/ Notorious kidnapper, Chukwudimeme Onwuamadike aka Evans has been sentenced to life imprisonment alongeside two others, even as the Nigerian Bar Association (NBA) hailed the judgment.

The Ikeja NBA lauded the sentence of life imprisonment given to Mr Onwuamadike by an Ikeja High Court.

Justice Hakeem Oshodi on Friday sentenced Evans and two of his co-accused, Uche Amadi and Okwuchukwu Nwachukwu, to life imprisonment after finding the trio guilty of a three-count charge of conspiracy and kidnapping.

Speaking with the News Agency of Nigeria (NAN), the Chairman of the Ikeja Chapter of the NBA, Mr Bartholomew Aguegbodo, lauded the verdict.

“The sentence is not surprising. It is something he (Evans) must have even seen coming, because evidence against him was overwhelming.

“The sentence of life imprisonment is fair considering the evidence against him,” the NBA chairman said.

A lawyer and lecturer at the Faculty of Law, University of Lagos, Wahab Shittu also hailed the judgment, noting that there should be consequences for criminal infractions.

“Once there are consequences for such infractions, criminal offences are deterred, and the society is safe and secure and victims are assuaged,” he said.

According to Mr Shittu, the verdict is also a proof that there is rule of law in Nigeria.

“The fact that he was subjected through the trial process, and not dealt with extra-judicially, shows that our democracy and justice delivery system are working,” he said.

Human rights activist and lawyer, Malachy Ugwumadu, said that justice had been served and the “long arm of the law has caught up” with Evans and his accomplices.

Mr Ugwumadu,who is also a former Chairman of the Committee for the Defence of Human Rights, said that evidence against Evans was overwhelming.

“The trajectory of the trial is one that saw so many lawyers exiting the case possibly because they appreciated the watertight evidence presented in relation to the charges.

“This is a positive outcome in the battle against crime and criminality.

“Criminals may initially feel that they have the upper hand while enjoying the proceeds of crime or loot but the law will eventually catch up with them,” he said.

According to the state government, Dunu was shackled and blindfolded during his 88-day ordeal, which ended after he escaped from captivity on May 12, 2017, and alerted the authorities.

At the time of Dunu’s escape, the convicts had collected 223,000 euros as ransom from his family for his release.

Evans’s other co-defendants- Ogechi Uchechukwu, Chilaka Ifeanyi, an ex-soldier, and Victor Aduba, also an ex-soldier, were, however, discharged and acquitted.

The court held that there was no evidence linking them to the crimes.