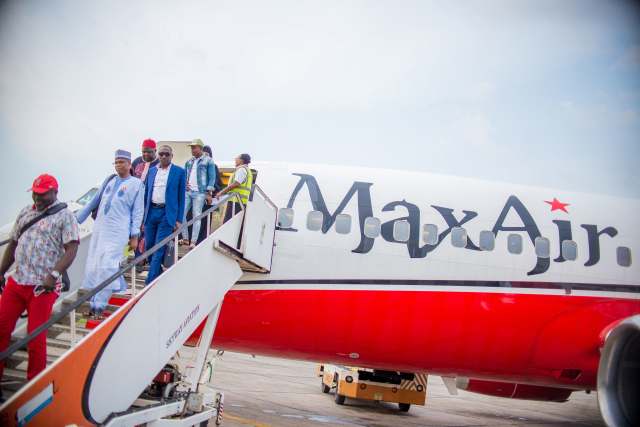 Reports said the Max Airplane, with the number VM1645, slated for take-off at 1.30 pm had about a 30minutes delay.

The aircraft later took off around 2:00 pm with passengers filled to the brim.

It was gathered that 10 minutes after take-off, the plane began to swerve around the air until it made a detour for an emergency landing.

The cause of the near mishap is yet unclear. Sources said an engine failure allegedly caused the incident, just as others attributed the incident to a bird strike.

Narrating the incident, one of the passengers, Samaila Suleiman, said it was a near-death incident, accusing the airliner of negligence.

Mr. Sulaiman disclosed that he heard a strange sound when the aircraft took off but dismissed any strange feeling of insecurity.

He said: “I heard a strange sound during the take-off but brushed it aside. I have used aircraft many times but had never heard such a sound during take-off.

“The cabin crew members and the pilot were helpless because they lost control of the aircraft.

“Not even that radio announcement was made until we saw ourselves back at the airport where we took off.

“It was a near-death experience. Many other passengers and I were traumatised. Many of us cancelled our trip and returned home.”