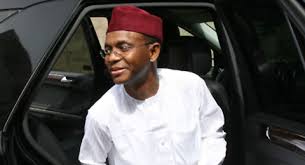 Former minister of the Federal Capital Territory and Interim Deputy National Secretary of the All Progressive Congress APC , Mr. Nasir El-Rufai, has finally reported for questioning at the offices of the State Security Service, SSS.

The APC chieftain arrived the Yellow House Headquarters of the SSS at the early hours of Monday in company of some party chieftains including Senator Chris Ngige and Rivers State Governor Chubuike Amaechi.

El-Rufai’s residence was stormed last Friday by the agency operatives who sought to arrest him for interrogation in connection with alleged incisive comments made by him that there will be violence in Nigeria in 2015 if the elections are rigged.
The controversial ex-FCT minister tactically evaded arrest that day, demanding for a warrant of arrest from a court of competent jurisdiction as a condition for him to honour the invitation. The agency announced over the weekend that it has a warrant of arrest on the APC chieftain.
Sources told Newsinvestigators that upon arrival at the Yellow House, only El Rufai was allowed into the office as his party members who were with him on solidarity were denied entry at the premises of the DSS.