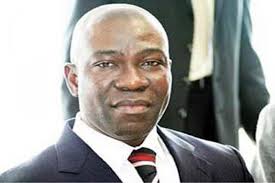 By Jackson Udeani – The Deputy President of Senate, Ike Ekweremadu has commiserated with victims of recent fire incident that claimed eight lives and destroyed properties in Nnewi, Anambra State.

Sen. Ekweremadu who described the incident as a major setback to the economic development of Nnewi and the entire South East, expressed concern about the incident.

The Deputy President of the Senate who was on a sympathy visit to the Chairman of the Chicason Group, Dr. A. C. Okafor at the company’s office at Nnewi on Tuesday also toured the scene of the incident where he expressed deep sorrows over the fire disaster, especially the eight lives lost to the inferno.

“For me, this is also a major setback for the business development, not only in Nnewi, but the South East and the nation. But our major concern now is the families of those who lost their loved ones. I would like to use this opportunity to condole them and to pray God to grant the souls of the deceased a peaceful repose”.

The Senator prayed against any reoccurrence, noting that he knew Dr Okafor as a man who places premium on ethics and the safety of the business environment.

“Knowing you very well, I am sure you must have taken all kinds of precautions, but we are still human and I therefore pray that this kind of thing will not happen again”, he said.

He commended the company for taking immediate steps to reach out to the families of the victims and called on all to rally round the families of those affected by the inferno in the spirit of the yuletide and Nigerian culture of charity.

“So, in times like this, we want to assure you that you are not standing alone; we are with you and God will also stand by you to ensure that you and the people of Nnewi pull through this major challenge.

In his response, the Chairman of Chicason Group, Dr Okafor, expressed gratitude to God for limiting the scale of the incident, adding that if the fire had entered the factory, it would have resulted in monumental loss of human and material resources in the community.

Describing the Deputy President of the Senate as a man who has a heart to serve, he thanked him for coming in person to identify with the people of Nnewi and share in their pains. He prayed God to continue to guide him.