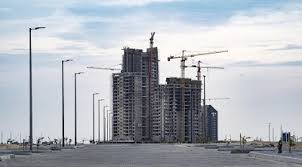 By Nuel Suji – Lagos State Governor, Akinwunmi Ambode has expressed confidence that the Eko Atlantic City project would not only boost the economy of Lagos, but also increase the Internally Generated Revenue (IGR) of the State.

Mr. Ambode who spoke on Sunday during a tour of the City project expressed delight that the State revenue would witness increment when the City is completed.

The Governor was accompanied on the tour by members of the State Executive Council.

He pledged the total commitment of his administration towards the success of the project, saying that it would go a long way to facilitate the quest to boost the State’s economy.

Mr. Ambode said: “I would like to express the total support of this government to this project because at the end of the day we need to grow the economy of Lagos and this obviously is going to have multiplier effect on our IGR. We promise that we are going to grow our IGR to N30bn by 2017 and N50bn by 2018 and this project is a sure outlet in achieving that goal,” he said.

He also expressed satisfaction on the infrastructure already put in place, saying that it now behooved on investors to take advantage of the massive opportunities.

The Eko Atlantic City project is a multi-billion-dollar project sitting on over 10 million square metres and is expected to accommodate over 150,000 people who would reside there and another 250,000 who would work and commute within the city on a daily basis.

While commending the promoters of the project for their confidence in committing huge resources to the Nigerian economy, Mr. Ambode said their investment was a positive sign that Nigeria remained the investment hub in Africa.

“Notwithstanding the economic recession that has befallen the country right now; we have come to also show that outside the recession, there is a whole lot of progress going on in the investment climate in Lagos State.

“We are very happy that the signs are looking very good for investment in Lagos. We are also very happy that we are doing everything possible to encourage investors to come into the State and I will like to assure that we are committed to make this project a big success,” he said.

Mr. Ambode, who also inspected the 8.5km long shoreline wall, otherwise known as the ‘Great Wall of Lagos’, built to protect the city, said it was gratifying that the project would not only protect the new city, but also protect the whole of Victoria Island against any ocean surge, which was one of the primary reasons for the project.

“This is a new and a bigger version of Victoria Island. We are going to have an Energy City here, a financial hub that is more or less going to run under a Free Trade Zone and so on. Basically, all these put together turns Lagos to that leader that we want it to be in Africa and the quality of infrastructure that has been put here is also encouraging.

“I just want to encourage other investors and other people who had taken one step or the other in respect of the Eko Atlantic City that the time is now because in another one and half years, this place will be something else.

Earlier, Chairman, Eko Atlantic City, Ronald Chagoury said one of the first two residential buildings in the new city would be completed by the end of August, while the second would be ready before the end of the year, adding that the first office block would be ready between September and October, 2016.

He added that the Great Wall of Lagos was scientifically designed to withstand any ocean surge and that it was built to last for 1, 000 years.

The Managing Director, Access Bank, Herbert Wigwe, whose bank is the major partner with the promoters of the project and the Lagos State Government, said aside the fact that adequate arrangement had been made to protect the City, the project was all about saving the State and creating a new tomorrow for people to live in Lagos.

He added that with the project, the land that was lost over time to the bar beach had been reclaimed, saying that investors and interested people need not entertain any fear as to the safety of the City.