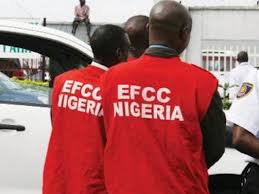 By Nuel Suji – Acting chairman of Economic and financial Crimes Commission (EFCC), Ibrahim Magu on Wednesday disclosed that the agency has granted autonomy to the Nigeria Financial Intelligence Unit (NFIU) to enable it to operate as an autonomous body.

This is even as Magu disclosed that over 200 cases have concluded between January to November 2017.

The Egmont Group had suspended Nigeria as a result of the interference of the EFCC in the workings of the NFIU. It asked the country to amend its law establishing the NFIU to make it independent or get expelled by January 2018.

NFIU is an investigative arm of EFCC that deals with matters relating to financial institution’s crimes.

Magu who appeared before Senate on Anti-corruption to give account of 2017 budget implementations failed to submit details of recovered loots by the agency to the committee but promised to make it available to the committee clerk later.

He said starting from January 1, 2018, NFIU would begin operation as independent organization.

Magu told the committee that the agency has a separate budget from that of the Economic and Financial Crimes Commission.

In his reaction, chairmam of the Committee, Senator Chukwuka Utazi said the N800 million given to the agency is not enough for the agency.

According to him,  N800 million cannot go anywhere if you want them to work,  they need to be properly funded and equipped.

The chairman also requested for pay roll of the 96 workers in NFIU from the head of the agency.

Utazi said, “we need to know the work force of NFIU.  “