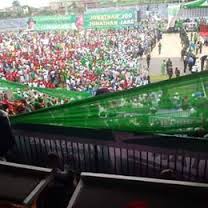 The All Progressives Congress (APC) has called on President Goodluck Jonathan to immediately halt the rallies being organized across the nation in his support by the Transformation Ambassadors of Nigeria (TAN).

TAN, a political pressure group, had embarked on nationwide rally to shore up support for Jonathan’s re-election bid.

But the APC said the rallies are jeopardizing Nigeria’s efforts to control the spread of Ebola.

In a statement by its National Publicity Secretary, Mr. Lai Mohammed, the party said: “Mr. President, you said your ambition is not worth the life of any Nigerian. But the TAN rallies for your re-election are endangering the lives of thousands of Nigerians in these days of Ebola. Some things must simply transcend politics. This is one of them. Please stop the rallies now.”

The APC said the President must in particular ensure that the rally slated for Port Harcourt, Rivers State on Saturday is stopped in view of the spread of the Ebola virus to the Rivers State capital and the fact that 100 people have been placed under surveillance there following the death of a medical doctor from a suspected Ebola infection in the city.

The APC added: “If TAN goes ahead to organize its rally in Port Harcourt, can anyone guarantee that none of those who have had contact with the medical doctor will attend? It can only be better imagined the kind of danger that those who will attend the rally will be subjected to. Therefore, President Jonathan has a historic opportunity to put the well being of his compatriots above politics, for once.”

The party reminded President Jonathan of the statement he made on August 8, 2014, when he was declaring the Ebola Virus Disease in Nigeria a national emergency, thus: “Religious and political groups, spiritual healing centres, families, associations and other bodies should, in the meantime, discourage gatherings and activities that may unwittingly promote close contact with infected persons or place others at risk.”

It also reminded the President that his administration has postponed the resumption of private and public primary and secondary schools across the nation as part of the measures to curtail the spread of the virus, wondering what message the same government was sending to Nigerians by allowing the TAN rallies to continue.

“Mr. President, add this to the fact that Nigeria’s economy is losing millions of dollars to the Ebola disease, and you will realize that the need to control the disease supersedes personal political considerations,” the APC said.

The party said the TAN rallies in Awka, Anambra State and Ibadan, Oyo State and the forthcoming ones in Port Harcourt and elsewhere flout the advice by the President against large gatherings that can encourage the spread of the disease.

It described as untenable the argument that the rallies are not being organised by the government, hence Jonathan has no control over them.

The APC added: “Mr. President, you are the sole beneficiary of these rallies. Top officials of your administration, led by Secretary to the Government of the Federation Anyim Pius Anyim, have been attending the rallies. The signatures being collected by TAN are ostensibly to encourage you to run again. So this is your show.”