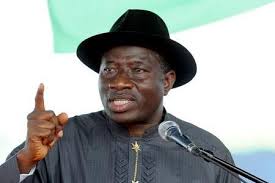 President Goodluck Jonathan has urged politicians to shun desperation while seeking to serve, saying, though he is willing to continue to serve as Nigerian president, he is not desperate to continue in office.

Jonathan who spoke at a book launch held at the Banquet Hall of the Presidential Villa in Abuja, Friday, said he remained steadfast and unruffled despite the many criticism against him, adding that people often wondered why it was so.

“Sometimes, people ask me that Mr. President, from what we read and what we see, we see you still smiling and unruffled. Yes, nothing will really ruffle me because I’m willing and ready to serve, but I’m not desperate to serve. That’s what keeps me going,” he said.

The book, “The People’s Choice: The story of President Goodluck Jonathan” written by Rev. Fr. Charles Imokhai, chronicles the life of President Jonathan from his humble beginning to his ascendancy to the presidency.

At the event which had in attendance, businessmen, politicians and groups, over N175m was donated for the launch of the book.

The president asked politicians vying for elective positions to shun desperation, saying Nigeria would be a better place if politicians are not desperate to serve.

“My second message is to all of us, especially those of us who are politicians, that for all of us who want to serve, we should ‎be ready to serve, but we shouldn’t be desperate to serve our people,” he said.

He added that if politicians who aspire to serve at the local government, as state governor, National Assembly up to presidency can shun desperation, Nigeria will be better for it, he observed.

The president described his life story as a humble one, saying most accounts of his life published so far published are inaccurate.

He said the book only gave an account close to being accurate, pointing out that he would write the most accurate story of his life after leaving office.