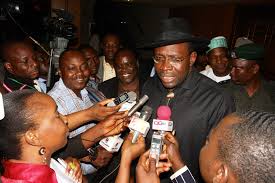 By Jackson Udeani – Governor of Bayelsa State and candidate of the Peoples Democratic Party (PDP), Hon. Henry Seriake Dickson, has demanded the immediate withdrawal of soldiers deployed to provide security in the ongoing governorship election in the state, accusing them of being used for rigging.

Mr. Dickson specifically accused the soldiers of colluding with the All Progressives Congress (APC) and the Independent National Electoral Commission, (INEC) to rig election in seven wards in Southern Ijaw LGA.

The Governor who spoke in a live radio interview on Monday in Yenagoa, said despite calls by the stakeholders for postponement of the election as a result of the security challenges, which led to the death of no fewer than five persons, INEC went ahead without addressing the issue.

According to the governor, electoral materials meant for the election were distributed late in the night and subsequently hijacked by suspected APC thugs aided by military personnel.

He disclosed that some INEC adhoc staff and corps members are still being held hostage for failure to accede to the request of some APC chieftains in the affected wards.

Apart from intimidating and harassing eligible voters, members of the leading opposition party hide under the cover of darkness to perpetrate electoral fraud, which includes thumb printing of election materials and filling of the election result sheets.

Expressing concern over what he described as undemocratic act and a flagrant violation of the fundamental human rights of law abiding people of the state by the INEC officials and security operatives, Governor Dickson called for timely intervention of the international community to prevail on the Buhari led Federal government to ensure fairness.

According to him, “what the Nigerian government is doing is a coup against democracy and subversion of my authority as governor and even of the peace and security of this state.

“If you asked, who is creating this mess, it is the APC led Federal government deploying for the first time the military personnel to humiliate and attack people and forcing them to vote midnight. It has never happened anywhere in this Country.

“They reason for this avoidable mess in Southern Ijaw is because by the calculation of the APC led government with tacit support of the military to forcefully hijack some election materials on that Sunday so that they can aid APC to write results without voting” he submitted.

Speaking in the same vein, the Acting National chairman of PDP, Prince Uche Secondus said the development is unacceptable, as it negates all known democratic norms, assuring the governor of the party’s support in fighting against political criminality and injustice.

He called on President Muhammadu Buhari to immediately call to order the Minister of Defence, Gen. Mohammed Dan Ali (rtd), the Chief of Army Staff, General Tukur Buratai, the Inspector General of Police, Solomon Arase and the top brass of other security agencies.

His words, “we stand shoulder to shoulder with our governor and the good people of Bayelsa State. So far, so good, what we have heard from Southern Ijaw is shameful and this anti democratic measure being taking by the Federal government, asking the soldiers to conduct election is absolutely unacceptable.

“Elections have been conducted in all the other parts of the Country. I have not seen this type of invasion by the military.Our advice to Buhari and the Country is that the country is gradually sliding into a collapse democratically. He should tell the Minister of Defecnce and Chief of Army Staff that what they are doing in Bayelsa State is wrong and should be condemned.”

Governor Dickson is currently leading in 6 local governments out of the 7 released so far by INEC. Only results from the controversial Southern Ijaw are being awaited.