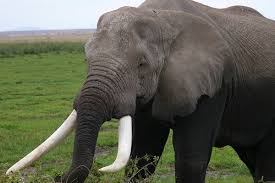 By Nuel Suji – The Minister of Environment, Ibrahim Jibril, has disclosed that the Nigerian Customs Service intercepted elephant tusks and pangolin, worth about N1.2 billion, between February 15 and March 22.

Even as he expressed worry over the use of the country as a transit route for illicit wildlife trade saying it has attracted negative image for the nation. 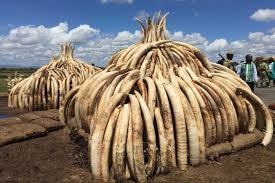 The Permanent Secretary in the ministry, Shehu Ahmed, who represented the minister spoke on Thursday in Abuja at a one-day workshop on how to combat illegal wildlife trade and international trade in endangered species of wild fauna and flora.

The workshop was organised by Wildlife Conservation Society (WCS), in collaboration with the Federal Ministry of Environment.

“The wild animals and their habitats have since been subjected to enormous pressure through over-exploitation, trade and irrational use to the extent that many of the animals are now threatened.

“But even more worrisome is the fact that Nigeria is being used as a transit route for illegal wildlife trade and the image of our nation is being destroyed,’’ he said.

Mr. Jibril said that the Federal Government was taking necessary steps and measures to protect and promote sustainable use of the terrestrial ecosystem, while sustaining programmes aimed at curbing forest management, combat desertification, land degradation and loss of biodiversity.

“I am highly delighted to address you at this important workshop and the ministry is highly impressed by your prompt response to this call to national duty.

“We will all make efforts to reverse the trends that are capable of destroying Nigeria’s rich biodiversity, denying our nation the full realisation of its economic development potential.’’

He lamented the gradual extinction of some high-grade timber species like Iroko, Ebony, Brown Mahogany and African Oak, among others.

“The State Department of Forestry is now searching endlessly to be able to find some of these species through what is now regarded as tree exploitation or salvage logging,’’ he said.

“The ministry has programmes that constitute the framework for a dynamic, evolving process for cooperation among stakeholders.

“These programmes are catalysts for the involvement of entire society and point of reference for all agents involved in the process of conservation of nature to ensure environmentally sustainable development in the country.’’

In his presentation, Paul Dunn of Wildlife Conservative Society (WCS) said that the workshop was designed to address the menace of the illegal wildlife trade.

The News Agency of Nigeria (NAN) reports that the workshop was attended by relevant line ministries, members of the diplomatic corps and environment-related non-governmental organisations.