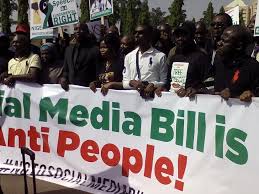 The group which began their protest from the Unity Fountain in Abuja displayed different inscriptions like “No social media bill”,‎ “Freedom of speech is fundamental human right”, Nigerians say #notosocialmedia bill#” etc.

The bill, which is titled “Bill for an Act to Prohibit Frivolous Petitions and Other Matters Connected Therewith,” has been dubbed ‘Anti-Social Media’ as it seeks to impose a two-year jail term for abusive statement.

Protesters argued that it was designed to muzzle free speech, insisting that existing laws on libel and defamation had taken care of the fears expressed by proponent of the bill.

In the group presentation submitted to the Senate which was made available to our correspondent titled” request for discontinuation of Legislative process Turning ‘the anti-social media’ into law.

The letter reads, ” we are writing to request a discontinuation of ‎the process of turning the ‘Act to Prohibit Frivolous Petitions and other Matters’ bill aka ‘anti social media aka “the anti frivolity Bill’ into law.

“We ask this for a number of reasons, the most important one which is that by criminalizing free speech, this bill directly contradicts Universal Declaration of Human Right (UDHR) and the 1999 constitution of Nigeria.”

The bill which was sponsored by the Senate Majority Leaders, Senator Iba Na’allah and has already passed second reading.

The bill has been widely condemned by media practitioners and civil societies as it is seen as a deliberate ploy to gag Nigerian media.
On Monday, Presidential Senior Aide on Media, Garba Shehu, assured Nigerians that President Muhammadu Buhari would not assent to any bill that impedes on freedom of speech or that is inconsistent with the provision of the nation’s constitution.
“As a key component of democratic principles, the President acknowledged that people in democratic societies are so emotionally attached to free speech that they would defend it with all their might.
“The Senate is a democratic Senate. The President won’t assent to any legislation that may be inconsistent with the constitution of Nigeria,” Shehu had reassured.