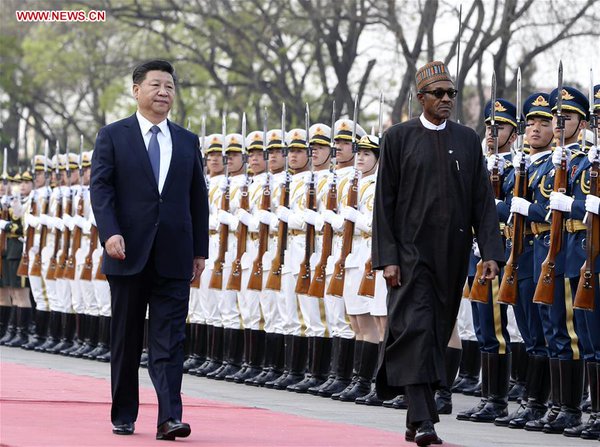 News Investigators/ The Chinese investors Association for Development and Promotion in Nigeria has expressed concern over what it described as United States’ propaganda against China in Africa, warning that it is capable of sowing enmity in the minds of Nigerians and Africans against China.

Chairman of the body, Ronnie Liu, in a statement urged Nigerians and Africans to be wary of and ignore the propaganda of the US trying to sow hate between the two worlds.

Mr. Liu’s statement is coming against the backdrop of increasing negative media reports on China, especially it’s 5G network technology being attributed as the cause of dreaded coronavirus.
The anti-chinese narrative started to trend the more on social media in the wake of the arrival of Chinese medical team to Nigeria on humanitarian assistance to help fight the coronavirus.

The statement lamented that while the US had sustained one of the world’s greatest economies for hundreds of years and also related with Africa those years without a lasting impact, it was uncomfortable that China had warmed its way into the minds of Africans through genuine friendship.
Mr. Liu who has lived and done business in Nigeria in the past 21 years said Nigeria and China has since been enjoying great and fruitful relationship.
Adding that while China in the face of the coronavirus pandemic, struggles to control its own crises, it hasn’t looked away from assisting African countries.

“The China Africa cooperation in the past 20 years through the Forum on China-Africa Cooperation (FOCAC) has yielded great dividends and it would be meaningless for us to allow ourselves to be driven apart by the US that hasn’t shown any better love for Africa even with a far longer relationship.”

Mr. Liu who is the co-chairman and founding leader of the University of Lagos’s Institute for Nigeria-China Studies.

According to him, “when we take stock of the benefits of FOCAC in 20 years and those of Africa-US relationship, we don’t look far to see the difference and also know who has been the real friend and who is the enemy between the two large world economies.

“Western media has made everything non-western evil. We need to sit down and look at it logically. Nigeria has been struggling to fight Boko Haram for over a decade, the US has never shown any genuine support.

“In fact, at a time they were technically supporting Boko Haram by blocking every opportunity to access weapons, whereas, the same US has been building sophisticated military bases all over Africa with several billions of dollars even all over islands in Africa.

“In a continent struggling to provide basic things such as clean water, road, education, etc, in terms of infrastructure development, the US hasn’t built anything tangible anywhere in Africa despite her big economy and influence. On the other hand, China is building projects across Africa from electricity to railways to airports, roads, and further awards scholarships to Africans.”

“Let’s say African countries default eventually in paying for the projects and China takes them over as canvassed by the US, who would still be using those infrastructure, Chinese? At least they brought them here, so if Africa can’t pay back and the Chinese take them over, these things would still be in use by Africans and improve quality of life, just like every private business. I said this by just assuming the position of the US is correct, although it is not because the conditions and terms of the project construction don’t include such takeovers.

“The US and its leader, President Donald Trump have made it a duty to see everyone supporting Africa as an enemy and call them all kinds unprintable names, impose visa ban on them, reporting the weak and negative sides of African nations and continuously ridiculing everything we do.

“Even before any takeover as they predict, the western media still find their ways into the hearts of Africans to hate Chinese. Sadly enough, some uninformed people, even those that are opinion leaders that should know better join in brainwashing the uninformed citizens.

“It was in 1809 that New York started operating underground train, that’s over 210 years ago, they never extended such to Africa. China started booming just 20 years ago and has extended everything technology they have to Africa, that have improved people’s lives- from phones, train, good airport, naval vessels, roads, scholarships, etc. So, Africans must sit down and think and know who their real enemy is and definitely China is not the enemy of Africa.”