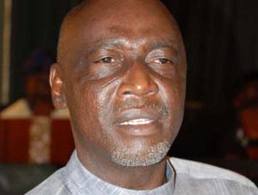 By Sadiq Umar – A Federal High Court sitting in Abuja, Monday has ordered the remand of a former Interior Minister, Abba Moro, in prison custody pending the determination of his application for bail.

Mr. Moro and four others are facing an 11- count charge bordering on obtaining by false pretence, procurement fraud and money laundering. The allegations bother on his alleged role in the controversial 2014 recruitment exercise by the Nigeria Immigration Services.

However, Anastasia Nwobia, a co-accused, was granted bail following her release from the custody of the Economic and Financial Crimes Commission (EFCC).

Counsel to Nwobia, Uche Chris had prayed the court to grant his client bail because she is a nursing mother and a victim of circumstance in the case.

The court granted his request but remanded Moro, the first defendant in the case in prison.

“I apply for a trial date and I apply that the accused persons be remanded in prison custody,” Counsel to the EFCC, Aliyu Yusuf said.

A statement by EFCC said: ”Moro, Anastasia Daniel Nwobia, F O Alayebami, Mahmood Ahmadu (at large) and Drexel Tech Nigeria Ltd allegedly defrauded a total of 675, 675,000 Nigerian applicants to the tune of N675,675,000, representing N1000 per applicant through e-payment for an online recruitment exercise into the Nigeria Immigration Service on March 17, 2013,”.

The accused are alleged to have contravened the Public Procurement Act, No 65 of 2007 in the contract awards by not following the necessary procedure laid down by the government.

‪“The contract was awarded through selective tendering procedure by invitation of four firms without seeking approval of Bureau for Public Procurement contrary to sections 40, 42 and 43 of the Public Procurement Act, No. 65 of 2007 and punishable under section 58 of the same act.

“Drexel Tech Global Nigeria Limited, the company that provided the online enlistment and recruitment services, is said to be unregistered and had no legal capacity to enter into the said contract. ‪

“There is also said to be no budgetary provision for the exercise in the 2014 federal capital budget, hence the applicants were made to bear the responsibility of funding the project without approval of the board, contrary to section 22(5) of the Independent Corrupt Practices and other Related Offences Act 2000.

The court fixed Wednesday to hear arguments for and against the bail application.