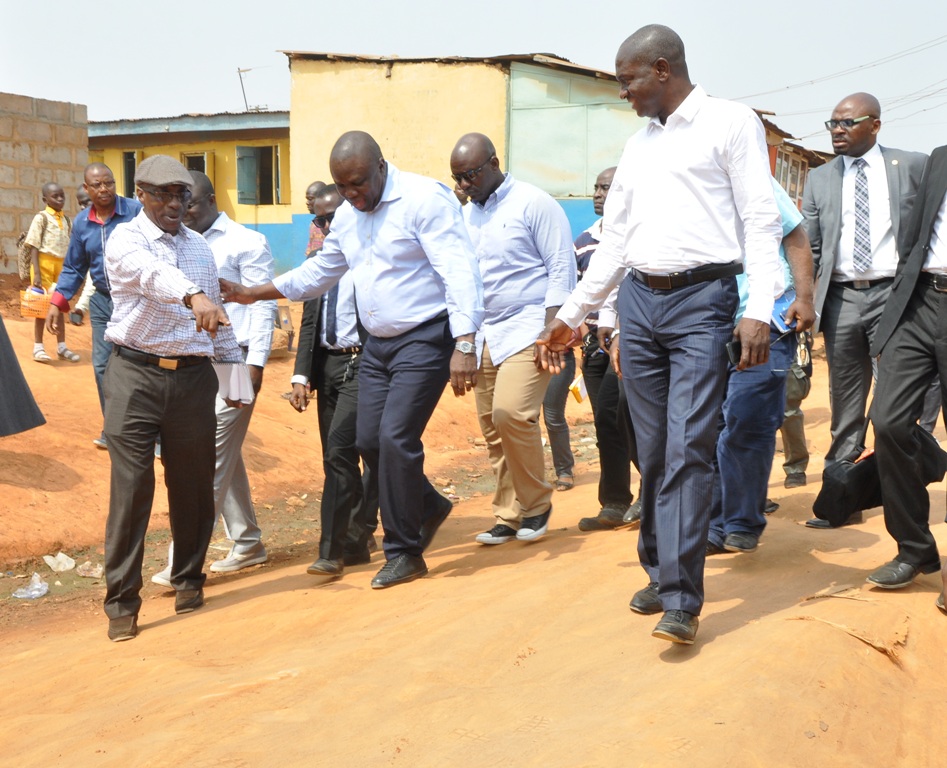 (LAGOS) By Dipo Awojobi – Lagos State Governor, Mr. Akinwunmi Ambode on Thursday expressed displeasure on the state of Ajasa-Command and Abesan roads, just as he assured residents that work would commence on the roads within the next two weeks.

Governor Ambode, who spoke during an inspection tour of the areas, expressed displeasure at the deplorable condition of the roads, saying such was unacceptable in the State.

The Governor assured that work would commence on the Ajasa-Command axis, after Ile-Iwe junction, where the previous road construction stopped, explaining that the project will accommodate walkways, street lights and drainage systems.

At the Command Military School, the Deputy Director in the Ministry of Works and Infrastructure, Engr Rasheed Akindele who briefed the Governor on the current state of the road, said the project was undertaken by the Lagos Metropolitan Transport Authority (LAMATA) around 2011/2012, but the Ministry of Works took the project further to the Command Bridge and then to Ipaja axis.

According to him, due to the volume of vehicular movement in the area as residents prefer to link Ipaja and Ayobo through the axis from Alagbado, the road deteriorated due to neglect.

Also, a community leader in the area, Alhaji Abdulrazak Olajide, told the Governor and his entourage, that the people have been suffering a lot in the axis due to lack of road, pipe-borne water, health facility, electricity and schools.

While addressing a large crowd that trooped out to see him, Governor Ambode said as a responsive and responsible government, work would commence on the road within the next two weeks.

He said: “I felt sad when I got here to see the state of the roads in this area. It is so displeasing, it is disheartening and it is totally unacceptable to me. I have been reading about the state of this area from several letters written to me by residents and that was what made me to decide to come and see the state of things for myself.

“I will start from where they stopped work previously at Ekoro Road and we will fix the drainage from there to Ajasa here within the next two weeks. We will not stop at that, we will fix the roads also. We are going to fix this road from Command Bridge down to Command and Ikola.

“In addition to that, I have listened to one of the leaders in this community. We are bringing schools into this community. One of our priorities for 2016 which we have stated in our budget tagged ‘The People’s Budget’ is to provide schools and health centres for all our communities and we will make sure that this part of Lagos is well represented in that provision.

“I just want you to be patient and cooperate with the contractors and when we do the road, we are also going to do street lights. Above all, when we do all these, you also make sure that you pay your taxes,” Governor Ambode said.