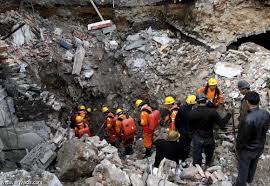 At least 20 people were killed Thursday when an unlicensed gold mine collapsed in eastern Democratic Republic of Congo.

According to local media, the accident occurred in the town of Kampene in Maniema Province.

Stephane Kamundala, an authority with a non-governmental organization in the region, said the dead included women and children and three people were seriously injured.

Kamundala said scores of people are trapped under the rubble and search and rescue work is continuing.

People have been trespassing into abandoned tunnels and working without security measures in gold, copper and cobalt-rich mines in the DRC.

In June, 36 people were killed in the collapse of a copper mine in the southeastern Kolwezi region.