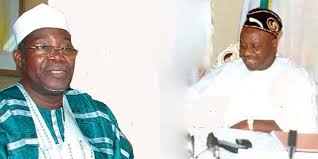 By Olusegun Emmanuel. Abuja.
In a bid to calm the already heightened emotions over the knotty issues before it, proceedings at the National Conference was on Tuesday afternoon adjourned till Wednesday when voting would be conducted on the recommendations submitted by the Committee on Devolution of Power.

Issues arising from the report generated heated debate since Monday when the co-chairmen of the Committee, Obong Victor Attah and Alhaji Ibrahim Coomasie, presented the 41-page report to the Conference in session.

This followed an application by the leader of the South East delegation to the Conference, General Ike Nwachukwu (rtd) who said he was mandated to speak on behalf of the leaders of other groups who are already making progress in their bid to forge a consensus on some contentious issues.

The adjournment, which was unanimously supported by the delegates present and voting, will also afford members of the Consensus Committee to conclude their meeting on the best possible ways to amicably resolve all contending matters arising from the report.

Such contentious issues include devolution of power, resource control, revenue sharing formula and fiscal federalism among others.

On resource control, the Committee recommended that the 13% derivation contained in the 1999 Constitution be retained with a proviso that a percentage of the 13% derivation devolved to the host communities from which the resources are derived was amended thus:

Some delegates while speaking on the report said the Presidential Amnesty Programme, the Niger Delta Development Commission (NDDC) and the Ministry for the Niger Delta should be abolished and their functions transferred to respective oil producing communities.

The suggestion was seriously opposed by other delegates who believed the Committee’s recommendation, particularly on derivation principle was the lowest the oil producing areas of the Niger Delta could accept.

A number of the delegates who spoke on Monday and Tuesday suggested an upward review of the percentage, dominant among this group suggesting 21.5 per cent

Another recommendation by the committee that mines and minerals including oil fields oil mining, geological surveys and natural gas should be retained in the Exclusive Legislative List as specified in the 1999 Constitution also attracted criticisms.

An amendment was proposed by a delegate that the item be moved to the Concurrent Legislative List of the 1999 Constitution in line with the decision of the Conference on the report of the Committee on Public Finance and Revenue Generation.