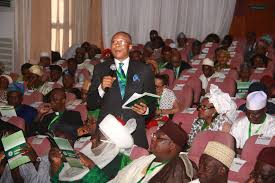 A proposal seeking to establish Niger Delta energy corridor, designed  to serve as a veritable tool for the rapid industrialization and diversification of the Nigeria economy met stiff opposition among delegates today, throwing the session into pandemonium.

The National Conference Committee on Energy had recommended the establishment of energy power plant in the Niger Delta to fast track development in the area.

It took intervention of a Lagos delegate Mr. Bode George, among other respected voices before the conference could agree to reconsider the matter and voted in support of the committee recommendation.

Similarly, the Conference stripped the Minister of Petroleum, the power to grant exemption on gas flaring in Nigeria.

Existing legislation empowers to Minister of Petroleum to grant exemption to gas flaring.
However, it was resolved, Monday, that all new non-associated gas produced in Nigeria be reserved for the domestic market until such a time that domestic quota is satisfied, and that a pricing regime for gas should be developed to make this possible.

Conference adopted the recommendation on a total ban on the flaring of associated gas and that any oil field that does not have infrastructure to capture associated gas should be shut down by the end of 2014.

Delegates agreed that communities in the Niger Delta region be paid adequate compensation for gas flaring that has affected their lives and environment.

It was equally resolved that proceeds from pollution tax to be collected from oil companies be used to clean up communities that are impacted by oil spill.

Conference demanded immediate initiation of efforts to clean-up oil spill and restore degraded environments in the Niger Delta in line with the recommendations of the United National Environment Programme.