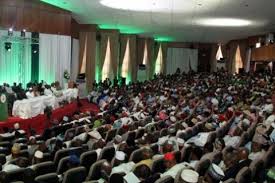 By Olusegun Emmanuel, Abuja.
Controversy surrounding the demand for complete removal of petroleum subsidy as recommended by the Public Finance and Revenue Committee of the National Conference has been resolved.

Delegates had taken hardline positions on the issue on Monday, following the Committee’s recommendation with one side for and the other side against.

However, through a motion by Dan Nwanyanwu and 24 others on Tuesday, it was agreed that removal of subsidy on petroleum products within the next three years should be preceded by building of new refineries and repair of existing ones to full capacity.

Conference observed that the issue of total subsidy removal on petroleum products has been a recurring decimal on the programmes of successive governments over the years; and that there are merits in the arguments of both the protagonists and the antagonists.

The decision of the Conference was drawn from the observation that sustained subsidy retention has become a major drain on the nation’s lean resources which cannot be left to continue indefinitely.

It was argued that although the subsidy regime has been fraught with massive corruption and may not necessarily be to the advantage of the poor masses as often indicated, immediate removal of subsidy without requisite mitigating infrastructure was bound to have a spiral effect that may see prices of essential commodities rising with attendant effect on the poor masses.

The Conference also resolved that two Accountant Generals, one for the Federation and another for the Federal Government be appointed henceforth subject to the approval of the Senate, for a single term of six years.

Based on arguments over the non-functionality of the Revenue Mobilisation, Allocation and Fiscal Commission (RMAFC) due to the overbearing attitude of the Executive Arm of Government, Conference decided that RMAFC should be placed on first-line charge.

Conference however rejected an amendment by a member that salaries and allowances of political office holders be placed at par with that of senior civil servants through amendment of Section 70 of the 1999 Constitution.

Also rejected was the recommendation that the Fiscal Responsibility Act of 2007 should be enshrined in the 1999 Constitution although it was resolved that its adherence be strictly followed.

It was also the decision of the Conference that henceforth, government agencies responsible for revenue generation and collection must comply with Section 162(3) of the 1999 Constitution which requires them to remit gross revenue in full to the Federation Account and resort to normal budget process of obtaining budget approval from the National Assembly to fund their operations.

Consequently, Conference resolved that all the sections of the enabling Acts of these departments and agencies of government that allow them to retain revenues and surplus to fund their operations be amended.

A recommendation that licensed professionals be engaged as tax administrators or consultants was rejected by the delegates; also rejected was the call for establishment of revenue courts for expeditious disposition of tax issues.

It was also the decision of Conference that the current 1.68% charge from the Federation Account for the development of solid minerals nationwide be increased to 5% while government should commence immediate utilization of the fund for the purpose it was designated.

The plenary session on Tuesday also approved the recommendation that solid minerals and mines should be included in the Concurrent Legislative List.

To boost mechanized farming across the country, Conference resolved and adopted the recommendation for establishment of Agricultural Development Fund and that 10% of the money from the excess crude account should be set aside for the fund.

It was also agreed that Section 85(3) be deleted from the 1999 Constitution to enable the Auditor General of the Federation to audit or appoint external auditors to audit Federal Government accounts in statutory bodies.

The section states that: “Nothing in this sub-section shall be construed as authorizing the Auditor General to audit the accounts of or appoint auditors for government statutory corporations, commissions, authorities, agencies, including all persons and bodies established by an Act of the National Assembly.”

To enhance the performance of the economy, it was agreed that government should source for funds to revamp Ajaokuta Steel Projects and other steel projects through public private partnership.

To monitor projects tied to borrowed funds, the Conference agreed that Debt Management Offices be established in each state of the Federation without further delay.

In a bid to eliminate corruption in the country, the Conference said the National Assembly should enact what it called Ill-Gotten Gain Act such that individuals can be held to explain the sources of their wealth.