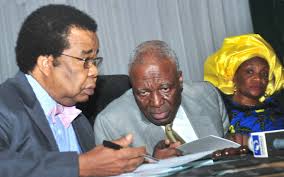 The resumed sitting of the National Conference on Monday witnessed heated debate as delegates commenced deliberation on the controversial report of the Committee on Devolution of Power.

The report, though slim in volume, is loaded with serious issues which focused principally on devolution of power from the centre to the federating units and the issue of resources.

The issue of devolution of power and resource control remain parts of the national questions bothering on political and economic restructuring.

However, at the plenary on Monday, the report was applauded by the delegates shortly after it was presented by the co-chairmen, Obong Victor Attah, the former governor of Akwa Ibom State; and Alhaji Ibrahim Coomasie, the former Inspector General of Police.

Critically examined in the report, whose recommendations would be subjected to vote by the Conference later, were the issues of resource control, derivation principle, revenue sharing and the development and exploitation of mineral resources nationwide.

While most delegates from the South, particularly, the South South and South East said derivation should be increased from the present 13 percent to between 21.5 and 50 per cent, others suggest it should be reduced further from where it is now.

Resource control, perhaps, was the most debated aspect of the report. Each delegate, depending on where he or she comes from either wanted considerable level of control of resources in view of the adoption of true federalism by the Conference while others said the issue did not arise as far as they are concerned.

Those who canvassed the view that states should control their resources said they did so in the spirit of devolution of power which allows the states to only pay or make appropriate financial contributions to the Federal Government.

Others argued that mineral resources in Nigeria are owned in law by the Federal Government as contained in Section 44(3) of the 1999 Constitution, as amended.

Section 44(3) states that: “Not withstanding the foregoing provisions of this section, the entire property in and control of all minerals, mineral oil and natural gas in, under or upon any land in Nigeria or in, under or upon the territorial waters and the Exclusive Economic Zone of Nigeria shall vest in the Government of the Federation and shall be managed in such manner as may be prescribed by the National Assembly.”

In its report, which is still subject to ratification by the Conference, the Committee said that after prolonged heated discussion on resource control, it unanimously agreed that the issue of derivation should rather be discussed instead of resource control.

It said its decision was informed by the emotive nature of the issue, which in the Committee’s view was capable of destabilizing the country.

On derivation, the Committee said some delegates were of the view that derivation should be increased either in a quantum or gradual manner; while others were opposed to any form of increase.

Instead, it said some members had proposed the reintroduction of the off-shore/off-shore oil dichotomy in derivation payments; at the same time, others stood up against it.

It reported that even the abolition of intervention measures such as the Ministry of Niger Delta Affairs, Niger Delta Development Commission and the Amnesty Programme were robustly discussed.

After long debates which spanned four days on the issue, the report indicated that a consensus was reached on the issue to the effect that the status quo be maintained in order to avoid upsetting the existing peace and equilibrium in the polity which it described a s a product of years of political engineering and craftsmanship.

On fiscal federalism which basically deals with how revenues are generated and distributed among the federating units in the federation, the Committee concluded that the powers conferred on the Federal Government to keep custody of and determine the terms and manner of fund allocation from the Federation Account negate the principles of fiscal federalism.

The Committee spotted what it called imbalance in favour of the Federal Government in the sharing formula and maintained that the imbalance has adversely affected the performance of the federating units. It therefore asked for a review.

It recommended that the powers of the Federal Government under Section 162(3) of the 1999 Constitution, as amended, to prescribe the terms and manner of sharing national revenue should be exercised through the Revenue Mobilization, Allocation and Fiscal Commission.

The Committee said RMAFC shall at the same time consult the federal and state governments before presenting a draft Bill on the matter to the National Assembly for enactment into law.

The committee further recommended that the percentage given to population and equity of states in the existing sharing formula be reduced while that assigned to social development factor should be increased to a higher percentage to ensure accelerated development of all parts of the country.

The proposed sharing formula by the committee is based on: diminished emphasis on principles of equality of states and population; increased emphasis on social development factor; and internally generated revenue.

On Mines and Minerals including oil fields, oil mining, geological surveys and natural gas, the committee recommends that they should be retained on the Exclusive Legislative List as specified in the 1999 Constitution but should be amended to read thus:

“The governments of states where the mining activities take place shall be involved in matters relating thereto; (and that) the government of the federation shall create a special fund to develope mines and minerals in states where such resources are undeveloped”

According to the committee, the overriding need to bring all other mineral resources of the country, hitherto undeveloped, into the mainstream development by activating National Strategic Plan for exploitation of minerals to boost their contribution to Gross Domestic Product(GDP), were considered in making this recommendation.

Still on mineral development, the Committee recommends a constitutional provision for the establishment of a Special Fund for the development of mineral resources in the country.

It further proposed that 4.5% of the total revenue accruing to the federation should be devoted to this special fund when established.

In addition, the Committee wants the Special Fund to be in the form of a Venture Capital Fund and that a competent body should be established to administer the Fund according to the guidelines that shall be specified by the National Assembly.

Before the presentation of the committee’s report to the Plenary, a delegate, Professor Awalu Yadudu, addressed the conference to “state his own part of the story” on the raging controversy of “consensus group and the existence of position paper”.

Yadudu debunked insinuations that he was primed to “scatter” the conference as claimed by another delegate but rather insisted that his decision to opt out of the consensus committee was informed by the fact that most of the decisions adopted in the position paper to be presented to the plenary of the conference were not part of the recommendations of any committee.

Earlier an Elder statesman, Chief Edwin Clark, had addressed the conference and harped on the need by delegates to put the interest of the country above sectional and personal interest.

Chief Clark expressed regret that the Consensus committee constituted to resolve contentious issues that may arise in the course of adoption of the recommendation of committees was “scattered” midway.

He said everyone must understand that Nigeria “is made up of equal citizens. Nobody is superior to the other. We came to this conference in order to have consensus on contentious issues.”

He appealed to delegates to see National Conference as an ample opportunity to contribute their quota to the task of reforming Nigeria.