By Sadiq Umar – Military chiefs from the Economic Community of West African States (ECOWAS) region met in Abuja at the weekend to strategise on possible use of force to compel recalcitrant President Yahya Jammeh to hand over power to president-elect, Adama Barrow. 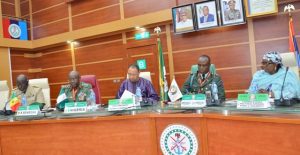 The move follows another failed attempt by ECOWAS’ heads of states to persuade Gambian President Jammeh, to peacefully hand over power to the president-elect

Nigeria’s Chief of Defence, General Gabriel Olonisakin while welcoming the participants to the Defence Headquarters in Abuja expressed the readiness of regional leaders and military commanders to continue the pursuit of dialogue with the political leaders of Gambia and ensure peaceful transition of power in accordance with the Gambian’s constitution and the peoples will.

General Olonisakin stated that the Abuja meeting is “part of efforts to mitigate the political impasse in Gambia following the refusal of President Yahya Jammeh to hand over power to the president elect, Adama Barrow after he lost the December 1 2016 election.”

Senegal, who is the immediate neighbour of the land-locked Gambia had offered to lead a military porch of the sub-regional bloc against Mr. Jammeh.

The African Union (AU) has vowed to refuse recognition of Mr. Jammeh as Gambian President from January 19 when his tenure would expire.

The Nigerian parliament has passed a resolution allowing Mr. Jammeh asylum status in Nigeria should he agree to peaceful transition of power in that country.