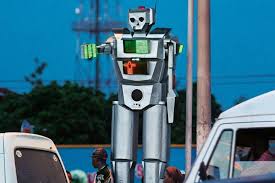 A northern Chinese city has put a team of robots into operation to aid traffic police in tasks such as patrolling, information consulting, and providing accident alerts.

According to Zhou Zuoying, deputy head of the Traffic Management Research Institute of the Ministry of Public Security, the robots were developed by parties including the Handan municipal public security bureau in Hebei Province.

The robot was China’s first robot traffic police to be put on duty, loaded with sensors and can move autonomously in all directions

Ma Zhanshan, chief of Handan municipal public security bureau, said the bureau aims to use the robots around the clock in important public locations.

He added that public location such as train stations and airports in order to reduce the work intensity of local traffic police.