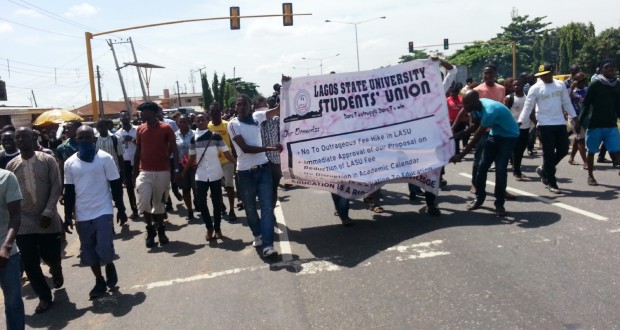 (Lagos)Angry students of the Lagos State University, LASU, on Tuesday went on rampage paralysing traffic on the Lagos-Abeokuta Expressway as they protested the hike in their tuition fees.

The students called on Lagos Governor Raji Fashola, to take immediate step to reduce the school fees from N390,000 to N48,500 maximum.

The protesters in their thousands stormed the Lagos Abeokuta Expressway and blocking the road which resulted in traffic standstill for hours.

Motorists who were on their way to their respective destinations lamented the helpless situation as men of the Lagos State Traffic Management Authority and Police were unable to disperse the rampaging students from the road.

All entreaties by the police and traffic officials to the students on the need to maintain a lane and allow other lanes to be used by motorists fell on deaf ears as they continued marching on the road chanting anti-government slogans.

The students displayed placards with various inscriptions, such as: “Fashola revert LASU school fees now,” ” Education is a right and not a privilege”.

President of the Students Union, LASU, Nurudeen Yusuf, said the students decided to stage the protest following refusal of the state government, led by Governor Babatunde Fashola to announce downward review of the fees as agreed by both parties as well as sensitise the public on the need to prevail on the government.

“We are not relenting in our struggle to get the fees to affordable level. We had a meeting with the committee members set up by Governor Fashola to look into the matter last week Tuesday. At the end of the meeting, we were made to understand that the state government was already considering the downward review of the few and would announce the new fees soon.

“Up till now, we have not heard from the state government, as I speak to you, over 1,000 students have dropped out of the institution because they can not afford the exorbitant school fees.

“We are determined, resolute on our stand to get the fees back to affordable level. It is either N48,500 or nothing.

“We are appealing to the governor to come to our aid and announced the downward review of our tuition fees the in the interest of fair-play, justice and peace,” he said.