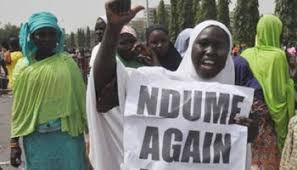 By Nuel Suji – Fresh facts emerging from the Tuesday protest by persons from Borno senatorial district against the suspension of Senator Ali Ndume have revealed that the online video discrediting the pro-Ndume may have been orchestrated by the media office of President of Senate, Bukola Saraki. 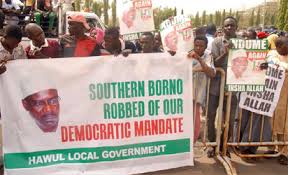 The video which is running on “Senate TV”, it was learnt, “was released to counter the pro-Ndume protest which caught the Senate leadership unaware and to‎ water down the effect of the pro-Ndume protesters who stormed the National Assembly in thousands,” a reliable source told News Investigators.
Our correspondent further gathered when it eventually done on the Saraki guys that the protest was real, “the Senate TV quickly arranged some fake IDPs to comment on Senator Ali Ndume suspension” to take the steam off the massive protest.
It was observed that only the Senate TV, operated by the Senate President’s office has the video a development corroborating the claim that the sponsor of the video is within that office.
Ndume had moved the motion for the probe of allegation of unwholesome dealing in the alleged purchase and clearance of a Range Rover SUV with fake Customs papers by Saraki and the alleged certificate scandal of Sen. Dino Melaye.
Both men were cleared of wrong-doing by the Senate Committee on Ethics and Privileges with a recommendation the Ndume be suspended.
Curiously, the anti-Ndume video also surfaced of Melaye twitter handle.
Many of the followers of Melaye on Twitter lambasted the senator for being petty on the matter and pledge their support for Ndume
@abaretukur while replying Dino‎ said,” They are not from idp’s Camp, WE ARE WITH NDUME, we want BUKOLA SARAKI to be remove as Senate president bcos he is suspect

Abiodun olorundero said on twitter,”@dino_melaye In actual sense, these were the people paid to rubbish Ndume. When did these ones become members of IDP? Mr 8 Degrees.

@uthabba said,” people in the video are not IDP.”
@bardenmubi said,”‎ Dino is stupid Senator of the year.”
Efforts to speak to spokesman of the Senate President office, Yusuf Olaniyonu, proved abortive.