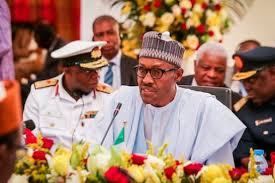 By Dipo Awojobi – Thirty years after unfulfilled promises, President Muhammadu Buhari on Thursday rewarded members of the Golden Eaglets that won the inaugural FIFA U-16 World Cup in China in 1985.

Buhar was then the military head of state when the team brought glory to the country.

At a reception which held in honour of the players at old Banquet Hall of the state house in Abuja, Buhari said the compensating was not for them winning laurels for the country but a token of appreciation for their patriotic efforts.

He announced that each of the 1985 players will get N2 million, while their coaches will be rewarded with N1.5 million.

Buhari also appreciated the current Golden Eaglets team that won the 2015 FIFA U-17 World Cup in Chile. He said each of the players will receive N1.2 million, while their coaches will get N900,000, and N600,000 for assistant coaches.

The president rewarded athletes and officials who did Nigeria proud in recent sports competitions. Each member of the Dream Team that won the U-23 African Nations Cup in Senegal last year got N600,000, while their coaches went home with N500,000 each.

The gold medalists in the 2015 IPC Asian Open International Powerlifting Championship in Almaty-Kazakhstan, were promised N600,000 each; silver medalists and coaches, N450,000 each, while team officials will get N250,000 each, according to the president.

Wellington Jighere who won gold medal in the 2015 World English Language Scrabble Championship in Peth-Australia got N1.5m; his coach, Anthony Ikolo got N1.2m while the team secretary, Makano Adamu got N450,000.