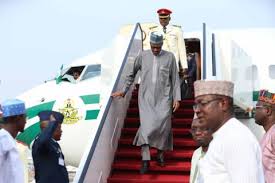 The President was received on arrival by top government functionaries led by Vice President Yemi Osinbajo, Chief of Staff, Abba Kyari, some State Governors, Service Chiefs and some of his aides.

A cultural troupe was also on display as part of efforts to the President back home.

Mr. Buhari took salute from the Brigade of Guards before proceeding to the State House.

Presidential Spokesman, Femi Adesina, had announced that Buhari would address the nation by 7am on Monday.