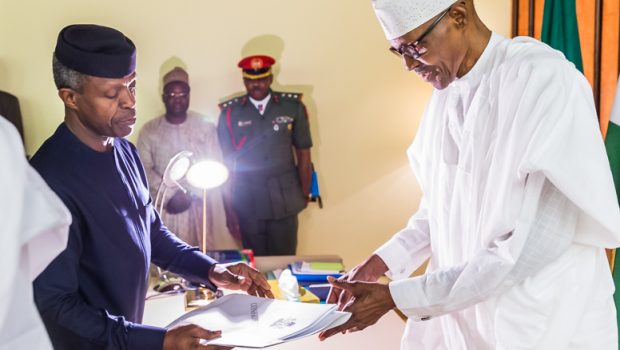 By Sadiq Umar – President Muhammadu Buhari, Wednesday received the report of the Investigation Committee probing the suspended Secretary to the Government of the Federation (SGF), Babachir Lawal and the Director-General of the National Intelligence Agency (NIA), Ayo Oke.

Vice-President Yemi Osinbajo led the committee members to deliver the report to Mr. Buhari at the State House, Abuja. 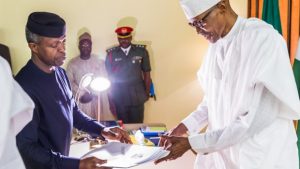 The report of the probe of allegations of corruption against the Mr. Babachir and Mr. Oke, currently under suspension has since been on hold following Mr. Buhari’s medical vacation which lasted103 days.

Mr. Osinbajo who acted as President for the period also could not make any decision on the report.

The Presidency, through a statement by the Pesident’s spokesman, Mr Femi Adesina had explained that the shifting of the FEC meeting was to allow the President receive the Report by the Investigative Committee headed by the Vice President, Prof. Yemi Osinbajo on NIA and SGF’s allegations to present its report to him.

However, Vice President Osinbajo speaking on the Report said, “Well as you can imagine we are always fair minded and the whole approach is to ensure that justice is done in all cases,” he said.

“It is s fact-finding committee as you know and what our terms of reference were was to find out based on the fact available to us and based on the interviews of witnesses of what transpired in those cases of the report one involving the SGF and the other the DG of NIA.

“We have now concluded that and we submitted a full report with recommendations to the president. We cannot, of course, give you any kind of details because the president has to look at the report, study it and then make his own decisions based on that report.

“This is a document which has just been submitted to the president. He is the one who will read the recommendations and the facts and then make a decision.

The outcome of the report will be communicated later.