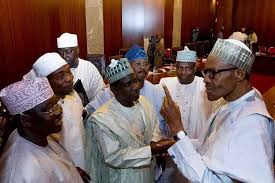 By Sadiq Umar – President Muhammadu Buhari is currently holding an emergency meeting with governors of the ruling All Progressives Congress (APC).

The meeting, which began at about 8pm, is taking place behind closed-door holding at the Conference Hall of the office of wife of the President at the State House Abuja.

Sources hinted that the “urgent meeting” might not be unconnected with the scheduled party congresses in which some governors are believed to be working to undermine Mr. Buhari’s desire for a free and fair congresses that would be rancour-free.

The sources further told News Investigators that the President is not comfortable with the content of the letter sent to the Independent National Electoral Commission (INEC) notifying it of the forth-coming congresses.

“Specifically, there are concerns about the fact that the letter indicated that the congress would merely fill vacant posts within the Executives rather than a whole hug fresh congresses in which interested candidates can vote or be voted for,” a reliable source said.

Those in attendance include: Vice President Yemi Osinbajo and the Secretary to the Government of the Federation, Boss Mustapha, Governors Nasir El-Rufai of Kaduna, Yahaya Bello of Kogi, Simon Lalong of Plateau, Jibrilla Bindow of Adamawa, Abdulaziz Yari of Zamfara, Rochas Okorocha of Imo and Abdulahi Ganduje of Kano.

Others are Kashim Shetima of Borno, Abubakar Bello of Niger, Tanko Almakura of Nassarawa, Abiola Ajimobi of Oyo, Ibikunle Amosun of Ogun, Godwin Obaseki of Edo and Abubakar Bagudu of Kebbi.