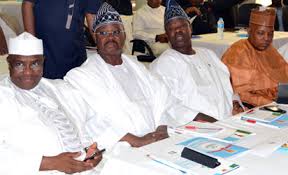 President Muhammadu Buhari will today meet with governors of the 36 states of the federation to find solution to the insolvency in most of the states.

At the meeting which will hold at the presidential villa, Abuja, the governors will push for payment of debt owed by the federal government to some states.

Most of the states in Nigeria can no longer pay workers salary with many owing as high as seven months salary arrears.

Governor of Zamfara state, Mr. Abdulazeez Yari who was a guest at the ‘NTA Breakfast Show’ Tuesday confirmed that the request for reimbursement of fund in respect of Federal roads which  were repaired by state government is on the table for the meeting.

“Some states are being owed, so, we believe it will help them to offset the debt,” Yari said

The governors had earlier resolved at a meeting in Abuja last week to seek federal government intervention in the form of bailout, to their lingering financial mess.

Chairman of the All Progressives Governors Forum, Mr. Rochas Okorocha, had while briefing journalists  after their meeting last week, said most states are unable to pay salaries of civil servants because of dwindling revenue from the federation account.

The nation’s income has been dwindling since the price of oil crashed last year.

Even the monthly meeting of the Federation Account Allocation Committee, FAAC, where revenues that accrued to the nation is shared among the three times of government could not hold as scheduled last week.

Buhari himself had in his maiden meeting with State House correspondents on Monday said he inherited a heavy debt burden and a near empty treasury.