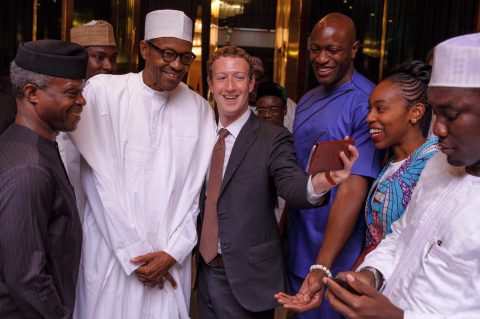 By Sadiq Umar – President Muhammadu Buhari has commended the Chief Executive Officer (CEO) and Co-founder of Facebook, Mark Zuckerberg, for sharing his wealth of knowledge with Nigerian youths and inspiring a new generation of entrepreneurs. 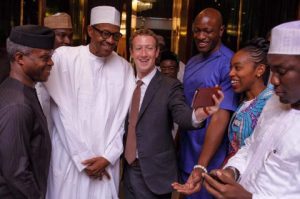 Zuckerberg returned to Nigeria after living Lagos for Nairobi, Kenya’s capital where he met with the country’s young internet entrepreneurs as well as Minister of Communication.

Buhari received the Facebook’s Chief Executive in the State House, Abuja on Friday, expressing delight in the various meetings he held with Nigerian youths since his arrival in the country.

A statement by President’s Spokesman, Femi Adeshina, said the President described the visit as timely as the country was already exploring opportunities to spur development through entrepreneurship.

“Nigeria has always been identified as a country with great potentials for growth, especially with our youthful population, but now we are moving beyond the potentials to reality.

“I am impressed by your simplicity in sharing your knowledge and wealth with those with less income.

President Buhari noted that the simplicity and magnanimity of the entrepreneur, who is among the world’s richest men, had also challenged the culture of lavish wealth display and impulsive spending that had become peculiar to Nigerians.

“We are more used to seeing successful people in air-conditioned places. We are happy you re well-off and simple enough to always share,’’ the statement added.

Responding, Zuckerberg said he was impressed by the interest, energy and entrepreneurial spirit displayed by young Nigerians in all the ICT camps that he had visited.

“I was highly impressed by the talent of the youths in the Co-creation Hub in Yaba. I was blown away by their talent and the level of energy that I saw,’’ he confessed.

Zuckerberg said he was in the country to promote the penetration of “fast and cheap” internet connectivity, Express-wifi, that would help people create online businesses and reduce poverty.