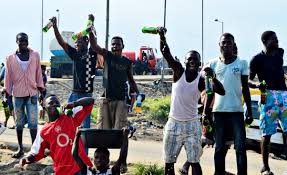 By Dipo Awojobi – Hell was let loose around 11 pm on Sunday 14, February, when thugs invaded the General Hospital Orile-Agege, Lagos with cutlasses, knives, and other dangerous weapons attacking and stabbing both staff and patients.

The thugs also invaded the engineering department, and the office of the drivers, where they stabbed some of the staff.

A parent, who brought his daughter to the hospital was also stabbed. According to him, when they attacked me, I told them I am a pastor and that made them to let me go.

The hoodlums, who attacked several other people in the hospital, carted away valuables of the patients such as money and handsets.

“They wanted the man, whose name was given as Taye, to die at all cost, but our doctors had attended to him just to safe his life. However, we suddenly saw the hoodlums invading the hospital with machetes, broken bottles and other dangerous weapons and started attacking everyone they came across,” she said.

It was gathered that a doctor, who went to the children ward to hide from the hoodlums was so unsettled that he could not attend to a child, who nurses felt needed an urgent medical attention.

Sources said that it took time before security men went to rescue the occupants of the hospital from the invading hoodlums.

The old men, who were securing the gate of the hospital were not spared from the urchins, who beat them mercilessly, but the evil men did not reportedly get to the children ward, which is located in the last floor of the building.

An observer recounted that the hoodlums attacked okada (motorcycle) riders and passersby on the road leading to the hospital.

Some of the in-patients in the hospital, who spoke to our correspondent, appealed to Governor Akinwunmi Ambode of the state and the state Commissioner for Health, Dr. Jide Idris to provide security in all the state’s general hospitals in to protect the lives of both the staff and patients.

Also speaking on the matter, Chairman of the Committee on Health in the Lagos State House of Assembly, Hon. Segun Olulade, promised to raise the issue of security in the state hospitals on the floor of the House as a matter of urgent public importance.