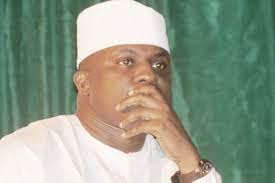 Daughter of the former Speaker of the House of Representatives, Hon. Dimeji Bankole, Yetunde is dead.

The young Yetunde died at about 5:55 a.m Thursday in a London hospital at the age of 6.

Speaker Bankole who is currently in UK, had earlier been scheduled to attend his party’s Peoples Democratic Party PDP, function in Abuja where he was going to be officially endorsed as the party’s governorship candidate in Ogun state for the 2015 election.