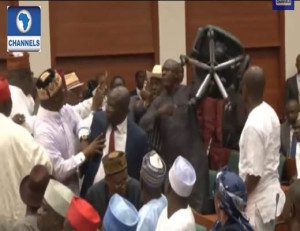 Pandemonium broke out in the House of Representatives this afternoon as factions of the All Progressives Congress (APC) engaged each other in a free for all, leaving wounds and bloody noises on its wake.

Members loyal to Speaker Yakubu Dogara and those loyal to the party his main rival in the speakership race, Rep. Femi Gbajabiamia on Thursday engaged one another in hot exchange physical combats.

Trouble stated at the resumed plenary session when the group loyal to the party wanted the Speaker to read the letter from the party which had nominated Gbajabiamila and others as principal officers.

The Speaker sensing the ominous sign promptly dissolved the House into executive session, a move which did not go down well with the Gbajabiamila group.

Some of the aggrieved members then went for the mace, which is the symbol of authority, to ensure that the proceeding does not continue in favour of Dogara group.

It took the timely intervention of the sergeant-at-arm who rushed and rescued the mace from members and took it out of the chamber.

The charged atmosphere soon degenerated to exchange of blows and shouting match among members.

It is still unclear how the situation would be resolved.