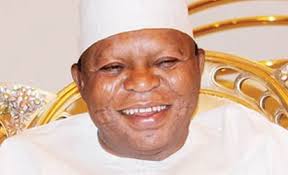 By Nuel Suji – The candidate of the All Progressives Congress (APC)  in the Saturday’s Kogi state governorship election, Abubakar Audu is dead.

The news of Abubakar’s death filtered in early Sunday few hours after the APC candidate INEC had declared the poll inconclusive.

He was said to have died few hours after he complained of not feeling fine and was taken to hospital.

Audu is already leading in the Kogi election results released so far.