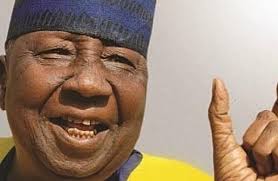 Danmaraya Jos passed on at about 4.p.m Saturday afternoon at the age of 69 after a protracted illness.

Director General of the Federal Radio Corporation of Nigeria (FRCN), Mr. Ladan Salihu, announced the news of his demise on his facebook page.

According to the post, “He died in Jos after a protracted illness. When I visited him two weeks ago, he spoke passionately about the Unity of the North and of one Nigeria. I remember when he insisted that my late father gave out the his (Danmaraya’s) adopted daughter’s hand in marriage some 15 years ago.

“We shared many moments. He was to me a brother and a friend. I am devastated. But I am proud he lived a very useful life, transforming society through music and silently through Islamic endeavours. May Allah grant him Aljannatul Firdaws. Amin. For the record he was a recipient of the National Honours of MON, OON and United Nations Peace Medal,” Salihu added.