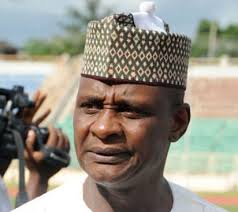 Outgoing President of Nigeria Football Federation, Aminu Maigari has been arrested by men of the Department of State Service (DSS).He was said to have been arrested earlier in the day alongside the General Secretary, Musa Amadu and Christopher Green.As at the time of filling this report, the reason why the three men were arrested could not be ascertained.The development has temporarily put the General Assembly billed to kick-off by 2.00 pm in Abuja on hold.The State Football Associations Chairmen are now fuming over the arrest, insisting that the Congress would not hold unless Maigari is allowed to preside over it.On Monday night, the Minister of Sports, Tammy Danagogo, formally acknowledged the receipt of Maigari’s resignation letter dated August 12, 2014, with effect from August 26, 2014.A statement by the Special Assistant (Media) to the Minister, Patrick Omorodion, noted that the tenure of Maigari-led Board ended on midnight of August 25, 2014.