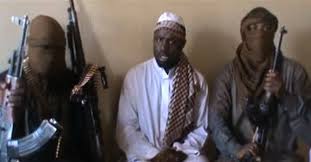 By Ibrahim Imam
Barely a week after the assurance by the newly appointed Chief of Defence Staff, Air Marshal Alex Badeh to eradicate the Boko Haram sect by April 2014, the insurgents on Monday went on rampage killing 74 people in two separate attacks in Adamawa and Borno states.
The attacks came on the heels of a deadly invasion of Kawuri District of Borno on Sunday in which 52 persons were killed.

The target of the Sunday attack was a Catholic church in Waga Chakawa village in Adamawa State, where 22 people were killed.

Agency reports said the church came under heavy attack while the Sunday Service was going on that morning, as terrorists detonated explosives and fired indiscriminatory at members of the congregation.”

“Afterwards, they set ablaze an unconfirmed number of houses within the vicinity, in an operation that lasted about four hours.”

Although, the figure could not be independently verified by our correspondent in Kano, spokesman for the Catholic Dioscese of Yola, Rev Father Raymond Danbouye, told Reuters that “22 people were killed in the attack on the church.“

“The whole village has been razed by Boko Haram and there were still loud explosions from different directions as I left, with bodies littering the village,” a resident, Bulama Kuliri, who narrowly escaped death,” Danbouye was quoted as saying.

Although no one has claimed responsibility for the attacks, there are strong indication from the mode of operation that Boko Haram, the north-east based Islamist insurgent group that is responsible for the deaths of over 3000 people in the last four years.