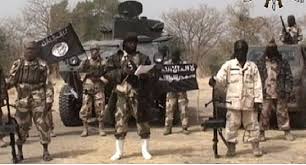 By Tom Garba,Yola – Rampaging Boko Haram insurgents again struck in Madagali northern part of Adamawa Sunday night, where they cut the throats of six residents of the in midnight attack, locals have said.

Madagali Local Government of Adamawa state, which shares border with the dreaded Sambisa forest, was one of the areas once annexed by Boko Haram insurgents.

The town was however later cleared of terrorists after Boko Haram was routed by Nigerian troops in a counter insurgency operation last year.

A fleeing resident, Musa Amadu , in a telephone interview, said the insurgents struck the village at about 12:30am on Sunday and picked their prospective victims in their houses before setting ablaze two houses of prominent personalities in the town, making residents to flee into nearby bushes.

The resident said the insurgents slaughtered six people, while several others sustained injuries.

“We are now in deep sorrow,” Mr. Amadu lamented.

According to him, the insurgents had a field night for many hours as they operated unchallenged due to complete absence of security personnel in the area they attacked.

Another resident of the area, Joseph John, accused the soldiers deployed of leaving them to their own fate, corroborating Mr. Amadu’s account that there were complete absence of security personnel in the attacked area.

Though military are yet to response to calls, the member representing Madagali and Michika constituency at the House of Representatives, Adamu Kamale, confirmed the attack, saying that six people were killed and eight others injured during the midnight attack.

“We are in mourning now,they slaughtered six people ,eight others seriously injured.

“The fact that our area share borders with Sambisa forest and Cameroon republic should have been enough reason why government must deploy security personnel to protect us. If the government does not take proactive measures to stem the ugly insurrection of insurgents into our domain, they will kill all of us.

“The number of soldiers deployed is grossly inadequate, we need more security personnel as our villages share borders with Sambisa forest,” the lawmaker said.