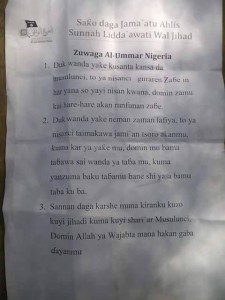 The Boko Haram insurgents on Saturday invaded Gombe, capital of Gombe state in the northeast Nigeria, warning residents not to participatie in the forthcoming general election, even as unconfirmed report said the terrorists broke into the military detention located at Biu road, inside Gombe town.

A reliable source in Gombe said the insurgents entered Gombe town via Maiduguri/Biu road at about 9:00a.m, assuring the residents to remain calm but warning them not to participate in the elections.

“They attacked the military barrack on BCGA road, they also broke the quarter guard and freed some people. they destroyed a police station in Kwadom village and another in Dadinkowa.

“You can imagine the audacity with which they came all the way from Maiduguri down to Gombe unchallenged.

The source, said the sect first laid siege on Dadin Kowa at about 6am where it staged the attack on Dadin Kowa and Hinna towns of Yamaltu/Deba local government areas of the state before advancing to Gombe township.

“They came in Hilux vans preaching and distributing leaflet written in Hausa language part of which translates as ‘Whoever professes Islam should distance himself from polling stations because we are going to attack polling booths.’

“It was when the military fighter jet arrived that started retreating,” the source added.

“Terrorists attack on Gombe has been repelled. Troops are in pursuit,” Olukolade twitted.

Gombe governor, Dr. Ibrahim Dankwambo, who was in Abuja as at the time of the attack rushed back to the state to take charge of the situation.

The government has however imposed a 24-hour curfew in the metropolis area of the state.

The secretary to the state  government, Mr. Abubakar Sule Bage,announced the imposition during a press briefing in Gombe.