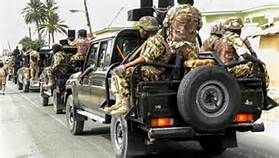 He made the plea while welcoming the Benin Contingent into MNJTF family at Farcha Camp, Ndjamena.

General Irabor used to medium to remind the troop of their task, which involves Garrison duties for the MNJTF.

In a statement by Chief Military Public Information Officer, Mustapha Anka Colonel, ”the Force Commander thanked the government and good people of Benin Republic for the unflinching support and cooperation in the fight against Insurgency within the Lake Chad Basin region,” it said.

General Irabor also appreciates the Honorable Minister of Defense, Chief of Defense Staff and services chiefs of Benin Republic for their commitments at ensuring the contingent arrival to the mission.

The FC reminded the troops of the need to be law abiding, discipline and remain professional in the discharge of their duties.

Earlier, the FC was welcome into the camp by the Contingent Commander / Officer Commanding, Commandant Datri Bienvenue Nonti who introduced his officers and the men to the FC.

“The contingent comprised of Eight officers and the One Hundred and Forty Two soldiers. This event witnessed tour of the camp facilities by FC.

“During the visit General the Irabor was accompanied by the Deputy Force Commandant (DFC) Brigadier General Mahamat Moussa Djoui and Chiefs of cells from the headquarter MNJTF,” it added.