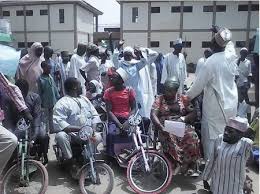 The angry physically challenged, mostly Northerners, who barricaded the road leading to Governor’s office, and the state house of assembly, forced the Governor to follow another route to his office, while returning from an event around 4pm.
Motorists were prevented from entering or going out of Lagos Government House and the premises of the state house of assembly.
A Non-Governmental Organisation (NGO), Justice and Empowerment Initiatives, Nigeria (Jei), which led the protesters, in a letter addressed to the Governor and dated 3 March, 2017 requested for an immediate action on the alleged dehumanisation of the physically challenged in the state.
In the letter, which was co-signed by the Co-Executive Director of Jei, Mr. Megan S. Chapman and its Staff Attorney, Barr. Friday Oteikwu, the group condemned the alleged “inhuman and degrading treatment that persons living with disability are subjected to at the Lagos State Rehabilitation Centre, Owutu-Majidun in Ikorodu Local Government of Lagos State.”
They stated further in the letter that they were “deeply concerned that the continued harassment, intimidation, extortion, unlawful detention, and cruel, inhuman, and degrading treatment of PWLDs at the Lagos State Rehabilitation Centre, Majidun is inconsistent with these public commitments of your Administration.”
Jei then urged the Governor to order the immediate and unconditional release of all PWLDs currently being detained “unlawfully at the Lagos State Rehabilitation Centre, Majidun as well as payment of compensation to the relations of persons, who died due to the condition of the Centre and to PWLDs previously unlawfully detained at the Centre.”
In a statement made available to the press and dated 7 February, 2017, the Physically Challenged Empowerment Initiatives, Nigeria also condemned the alleged dehumanization of their members by the Lagos State Government.
They alleged that last year alone,  they recorded six deaths due to the condition in which people are detained at Majidun-Owotu.
“One young man, who was unlawfully detained for 16 months was released, when he had grown too weak to walk, and less than a week after his release, died of suspected tuberculosis.
“Another young mother, who was nine months pregnant, when arrested had no option but to put to bed inside the cell aided only by her cellmates; her baby contracted neonatal tetanus due to being born in unsanitary conditions and died several weeks later,” they said.
They then demanded the closure of Majidun-Owutu “Rehabilitation Centre” as a place of detention for PWLDs and the immediate release of “all persons unlawfully detained,” and the immediate suspension of enforcement and subsequent repeal of Section 166 (1) of the Criminal Law of Lagos State that criminalizes ordinary street begging amongst others.
Addressing the protesters, a member of the state house of Assembly, Hon. Adefunmilayo Tejuosho, who stood in for the Speaker of the House, Rt. Hon. Mudashiru Obasa, promised them that the House would look into the matter and get back to them in due course.
She assured them that the state government was committed to inclusive governance and had several programmes to empower the physically challenged.