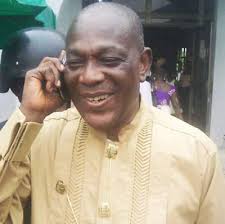 Former Chairman of the Peoples Democratic Party (PDP) in Bayelsa State, Col. Sam Inokoba (rtd) who recently defected to the All Progressives Congress (APC)  was feared  dead yesterday night after slumping at a meeting in Lagos. The news of his sudden death came as a rude shock to his close associates in Yenagoa, the state capital, this morning as it was being discussed in hush tones among members of the APC.

A local radio station, Royal FM, has since been reporting Inokoba’s death as breaking news.

A reliable source said Inokoba slumped and died on the spot in the Lagos home of APC governorship aspirant, Timi Alaibe over heated argument on the governorship ambition of both politicians.

According to sources, the argument arose when the late Inokoba was told to drop his governorship ambition to allow Alaibe emerge as the only aspirant from Kolokuma-Opokuma Local  Government Area since both men are from the same local government.

Inokoba was said to have picked his governorship form two days ago to contest the forthcoming election on the platform of the APC. A source confirmed that immediately he got his form, he went to Lagos on the invitation of Alaibe for “crucial talks” on the need for him (Inokoba) to shelve his ambition and allow Alaibe become the sole aspirant from their local government.

It was reliably gathered that Alaibe had offered N200 million to the late party stalwart but which was said to have sparked a heated argument between the two men and in the process, Inokoba slumped and died on the spot before he could be rushed to the hospital.

It will be recalled that a week ago the same late Inokoba was reported to have slumped at an APC stakeholders meeting in Nembe. The report was denied by Inokoba and his political associates. In the report, Inokoba was said to be receiving regular financial support from the Bayelsa State Government to facilitate his frequent medical treatment abroad. The report also claimed that the late Inokoba got N10 million from the state government two days before he defected to the APC for his regular trip abroad but he never did.