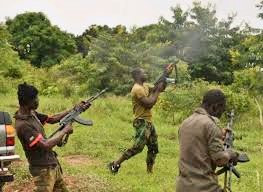 News Investigators/ The Police Command in Katsina, on Saturday confirmed an attack by gunmen on Government Science Secondary School (GSSS) Kankara, on Friday night.
The Police, in a statement issued by the command’s Police Public Relations Officer (PPRO), SP Gambo Isah, said the invaders fired severally before carrying out their dastardly act.
“Yesterday, at about 9:40 p.m., bandits in their numbers, shooting sporadically with AK 47 rifles, attacked GSSS Kankara, Kankara Local Government Area.
“The policemen on duty also responded to the attack and engaged them in a gun duel which gave the students opportunity to scale the fence of the school and ran for safety.
“The DPO Kankara, reinforced the policemen on duty with Armoured Personnel Carrier (APC) which forced the hoodlums to retreat into the forest.” Isah said.
The PPRO said that the police command was working with other security agencies and the school authorities to ascertain if students were missing following the attack.
Mr. Isah said that more 200 students who ran into the town for their safety during the attack had returned to the school, Saturday morning.
He revealed that a police Inspector sustained a gunshot wound during the incident, and was taken to the hospital where he is responding to treatment.