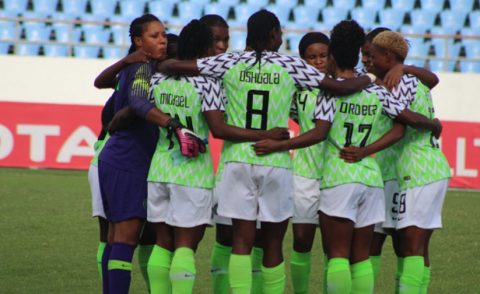 News Investigators/ Nigeria’s Super Falcons on Friday defeated the Lady Elephants of Cote D’Ivoire 2-0, with debutant Ifeoma Onumonu scoring twice to give her team a good head start in the pairing.

The win was in the first leg match of their final round fixture in the 2022 Africa Women’s Cup of Nations (AWCON) qualifiers.

In the match played at the Moshood Abiola National Stadium in Abuja, Nigeria’s persistence saw them opening scoring in the 21st minute.

That was when Esther Okoronkwo set up Onumonu inside the penalty box to fire the Super Falcons in front from close range.

Seven minutes later, Falcons goalkeeper Chiamaka Nnadozie was put to the test when Zote Nina sent a shot towards goal but she was quick to save it.

The Ivorians began to pile huge pressure from the commencement of the second half, in a bid to get an equaliser but the Falcons stood determined to extend the lead.

A minute later, the U.S-based Onumonu, who was making her debut national team appearance, latched on to another debutant’s floated pass.

Ashleigh Plumtree repulsed an Ivorian attack to float the ball from the left side to the right, and Onumonu only needed to lob over Ivorian goalkeeper Cynthia Djohore.

Falcons tried to register a more resounding victory with striker Gift Monday coming in for Okoronkwo in the 84th minute but Cote D’Ivoire put up a solid defence.

The visitors looked to score a consolation goal thereafter, but France-based Nnadozie made impressive saves just as defender Plumtree ensured the hosts maintained a clean sheet.

After the match, coach Waldrum said he was happy with the team’s performance.

“I thought that we had a good control of the game, so I am really proud of the players.

“We have Nnadozie, making a huge save at the end, keeping a clean sheet and we all know that it’s very important.

“We are also proud of this lady (Onumonu). This is her first opportunity to come to Nigeria and represent her country and she scored a brace.

“Ashleigh also gave a good account of herself and it was really a solid performance,” Waldrum said.

The coach also added that he was positive ahead of the return leg in Abidjan on Wednesday.

For Onumonu, she was excited to be making her debut, adding that she had always desired to play for the country.

“It’s an honour to play for this team, I have been watching them for years and I dreamt about playing for the Super Falcons and am excited to have scored a brace.

“I really just want to make impact in this team,” Onumonu added.

Winners of the fixture will qualify for the 2022 AWCON in Morocco in June.(NAN)