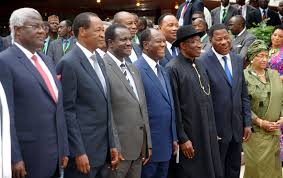 President Goodluck Jonathan will travel to Ouagadougou Wednesday as a member of the three-man delegation of Heads of State and Government raised by the Economic Community of West African States (ECOWAS) to facilitate the rapid resolution of the current political crisis in Burkina Faso.

A statement by Presidential spokesman, Dr. Reuben Abati in Abuja on Tue

sday said, Jonathan, with his Ghanaian and Senegalese counterparts Presidents Macky Sall and John Mahama, are expected to meet with Burkina Faso’s interim Head of State, Lt.-Col. Isaac Zida, opposition leaders, members of civil society and other political stakeholders in the country.

Mahama is the current Chairman of the ECOWAS Authority of Heads of State and Government.

The one-day visit to Ouagadougou is coming on the heels of mounting pressure by African Union on Zida to return power civilian government.

The Union has given the Burkina Faso military an ultimatum to transfer power back to a civilian administration within two weeks or face sanctions.

Recent political turmoil in Burkina Faso led to the resignation of former President Blaise Compaore and the assumption of power by Lt.-Col. Zida

The African Union’s democratic charter requires its 54 member-states to act against the forceful overthrow of elected governments on the continent.

President Jonathan will be accompanied to Ouagadougou by the Minister of State for Foreign Affairs, Dr. Nurudeen Mohammed and some of his principal aides and advisers.