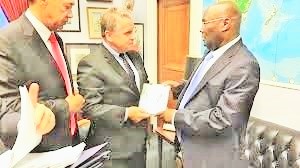 By Sadiq Umar – The Executive Director of Development Specs, Okey Ikechukwu, has described the visit of the presidential candidate of the Peoples Democratic Party (PDP), Atiku Abubakar, to the US as a major positive development that the party should use to rev up its campaign efforts.

Speaking at a forum organized to evaluate the short and long term implications of a PDP victory in the coming presidential elections, the philosopher and public communications expert pointed out that the PDP now has a heaven-sent opportunity to roll out a robust campaign and confidently take on whoever stands in its way.

Asked why he kept emphasizing the need for a PDP victory during his presentation, when there are other parties contesting the elections, Ikechukwu said: “It is true that the incumbent government, and nearly a hundred other political parties are contesting, but I usually focus on political engagements that are desirable and feasible.

“The aspiration of the APC government to return and continue for another four years is undesirable to me. In my informed view, it is only the PDP that has the capacity, spread and wherewithal to bury this dangerous aspiration and make it unfeasible. As for several brilliant candidates contesting on the platform of some other political parties, my take is that real capacity must be demonstrated outside Facebook, twitter, social media and public lectures. They have desirable aspirations that are, at the same time, unrealistic and unfeasible. Elections need foot soldiers, well-coordinated networks and effective control of polling booths in every Ward.”

Ikechukwu called on the PDP to maximize the media and perception mileage to be made from the image breakthrough offered by the US trip. He said: “The point to note here is that the question of whether Atiku can walk around freely in international circles is now answered in the affirmative. The APC had always murmured in the background, creating subtle mental discomfort for many people, that all may actually not be well with Atiku’s international standing. This US trip has taken away the presumed impossibility of his going to the US and the impression that the PDP is fielding a candidate that may not enjoy international credibility and respect. The incubus is off, so the party should simply go to town.”

The leadership and governance guru commended president Olusegun Obasanjo for “overcoming himself”, first by supporting Atiku after so many years of frosty relations and also for standing up for this serious effort to unseat the current, roundly incompetent, government that seems determined to ensure the annihilation of the federal republic of Nigeria.”

In response to journalist who raised issues about his recent caustic comments on the PDP campaign drive, via a back page comment on Thisday Newspaper, Ikechukwu went on the lighter mood, as he explained that it is sometimes helpful to take domestic matters to the village square, especially if the family has gone deaf and critical damage is being done to its interests.

He told the newsmen: “Gentlemen and colleagues, a few things are clear to me here and today. One of them is that the PDP must work as one house in order to unseat this government, or we are all finished. The other is that the South East should remember what happened to South West goernors from an opposing party immediately after the PDP won the presidential elections. Another point is that the party’s internal challenges are real, but they exist everywhere there are people trying to work together. This should not be allowed to cost Nigerians the chance to remove a government that is putting fertilizer on the tree of death. There is nothing personal here.”

Ikechukwu called on the PDP to now embark on a “final push” in its campaign, the way its vice presidential campaign candidate, Mr. Peter Obi, embarked on a surprising and impressive “final push” of infrastructure development and impact on the lives of the people of Anambra State in the last days of his tenure as governor. Concluding, Ikechukwu said: “This matter of Atiku’s international standing can no longer be put the table as a challenge to the PDP in the coming elections. The party has its issues, but these are far less than those of the APC, so they should just get on with it and move out these confounded guys in Aso Rock.”