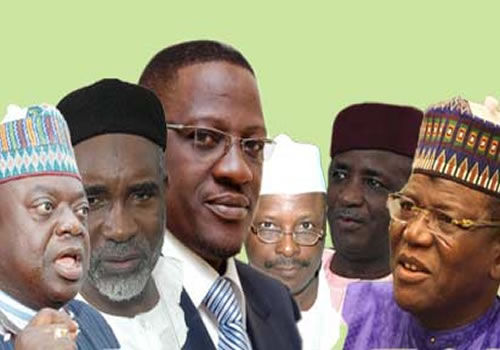 Barely 24-hours after their meeting was disrupted in Abuja,  aggrieved governors of the Peoples Democratic Party PDP yesterday met with former President Olusegun Obasanjo and former head of Interim government, Chief Ernest Shonekan in a renewed nationwide consultation with some leaders of thought and politicians.

The G7 governors  also met with former minister of Defence, General Theophilus Danjuma at his Ikoyi residence in Lagos.

Their earlier meeting scheduled for Kano Governor’s Lodge in Asokoro Abuja could not hold as security operatives moved in to block them.

Members of the group had last week parleyed with leadership of opposition All Progressive Congress APC in Sokoto, Jigawa and Kano respectively in a final push to quit PDP.

The meeting with Obasanjo at his expansive Hilltop residence in Abeokuta was behind closed door.

Details of the discussion was not immediately known, sources told NewsInvestigators that the governors restated their commitment to the peace and unity of Nigeria but expressed total disappointment over the lingering crisis within the ruling PDP especially what they described as “President Goodluck Jonathan unwillingness to shift ground to accommodate their positions.”

“They were equally concerned that the crisis may result in serious setback for the ruling PDP in the next election because a PDP misfortune will be gain to APC which as far as they know is now a formidable opposition,” the sources added.

“The governors first arrived at the Ikoyi residence of the former head of interim government at about 4pm a BMW Sports Utility Vehicle driven by Governor Amaechi. They were escorted heavily armed security details. They then proceeded into a meeting with Shonekan for about one hour. They told Shonekan of their readiness for peaceful resolution if only the president would be willing to shift ground.

In his reaction, Shonekan, the sources said pleaded for understanding as he also sued for cooperation amongst the political elites in the country. That was the governors’ first point of call.

At one of the meetings, the G-7 told their host that: “The president and Tukur are not ready for peace but violence; we knew that the president went on pilgrimage too, but between the time he went to Israel and now he has not deemed it fit to initiate the meeting, but instead they are taking desperate moves trying to intimidate our members,” sources told NewsInvestigators in a telephone interview.

They cited the marking of the new PDP secretariat for demolition by the Federal Capital Territory Administration FCTA was part of the desperate moves by the PDP against the opposing governors.

“I can tell you that the governors and the leadership of the new PDP have made up their minds to call the president’s bluff because he has shown that he has no need for peace and prefers violence; and since we do not think it wise to go that way, the best thing is to avoid all cosmetic peace meetings and prepare for the worst he thinks he can do to stop us.”

On the meeting with Shonekan, Rivers State governor  Rotimi Amaechi said the group was “consulting with the elders across the country on the issues that affect the party and the nation in general. We are talking about the ills in the country.”

Amaechi stated that the planned meeting with the leadership of the All Progressives Congress (APC), which was initially scheduled for Monday, would now hold today.

On the discussion with President Jonathan on the state of the PDP, Amaechi said, “We are waiting for him to call for the next meeting.”

Commenting on the visit, Shonekan thanked his guests but called for cooperation amongst the nation’s political gladiators  to move the country forward, saying the country belong to all. “God has given us all the things needed for growth and progress. We must try as much as possible to cooperate with each other, to make sure that the country becomes the envy of all,” Shonekan said.

He stated that he might offer himself in the efforts to reconcile the warring members of the PDP assuring that he would consult with people that are relevant in matter.”

A similar scenario played itself out at the Victoria Island residence of General Danjuma  the visiting governors were ushered into the private sitting-room of the former army boss where they met for some time only to emerge at exactly 6pm and proceeded straight to their vehicle.

National Publicity Secretary of the new PDP Eze Chukwuemeka Eze said the governors were simply going round to “report back their experience in the hands of President Jonathan and Bamanga Tukur”.

“Recall that before ever they formed the new PDP, the governors had been consulting with elders who told them to be patient; now they have to go back to them to report their experience so far in the hands of President Jonathan and Bamanga Tukur: that rather than giving hope for a quick resolution of the crisis, the problems are compounding.

“It is a way of saying that we stay here and die so we have to move on; I think it is the latter, we have got to move on,” Eze said.