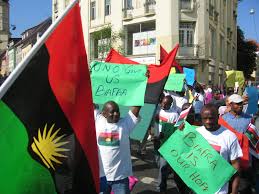 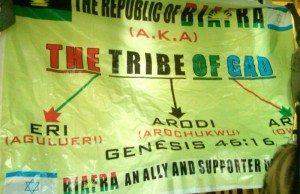 The Army is warning against the backdrop of renewed agitation by the pro-Biafra movement in South-Eastern Nigeria who are seeking the right to self-determination and the release of their leader, Nnamdi Kanu.

The Army spoke on Monday through the General Officer Commanding (GOC), 81Division, Maj.-Gen. Isidore Edet, at a briefing with journalists at the Officers Mess in Lagos.

Isidore said the Nigerian Army would like to send an unequivocal warning to all and sundry and more specifically, to all those threatening and agitating for the dismemberment of the country.

His words: “Committing treasonable felony and arson, as well as wanton destruction of lives and properties that once (soldiers) deployed, we shall apply the ROE to the letter.

“It is, however, hoped that such circumstances would not arise that we should deploy such operations.

“Let nobody make any mistake because within the ambit of the law, we shall apply the ROE to the fullest,” he said.

He pointed out that ,“the Constitution of the Federal Republic of Nigeria (FRN), 1999 (as amended) vide Sect 217 (2) (c) provides that the Armed Forces of Nigeria (AFN) shall suppress insurrection and act in aid of civil authority to restore order when called upon to do so by the President and Commander-in-Chief.

“This presupposes that troops have to use necessary force to quell crisis resulting in deaths, injury and damages to property,’’ he said.

“It is necessary to remind all about the Nigerian Army’s ROE and Code of Conduct for such operations in aid of civil authority for public knowledge and understandin,” Isidore added..

“The ROE and Code of Conduct set out the circumstances and limitations under which armed force may be applied to achieve military objectives in furtherance of government policy within Operation MESA and other IS Operations,” he further explained.

“Once deployed on any IS operations, it is the duty of an officer or soldier to ensure the enforcement of law and order in conjunction with other security agencies.

“It is inexcusable for troops to stand aside and watch the security situation deteriorate leading to loss of lives or damage to property without intervening.

“Such intervention should, however, be based strictly on sound judgment,’’ Isidore said.
The GOC also said that officers and soldiers had been warned not to take sides in any conflict, adding that those found wanting would face the consequences of their actions.

“Any officer or soldier found aiding or abetting any act of arson, vandalism or unprofessional conduct, would be severely dealt with according to extant laws,’’ he said.

He also allayed fear about the reported infiltration of Boko Haram insurgents into Lagos, assuring that the army was working round the clock to monitor and protect them.

“There is no cause for alarm and there is no need for Lagosians to fear, Isodore declared, saying that some arrests had been made but declined to speak further on it.

“We cannot disclose the details yet but we are working round the clock to ensure that Boko Haram does not have a safe haven in Lagos or southwest or any part of the country.